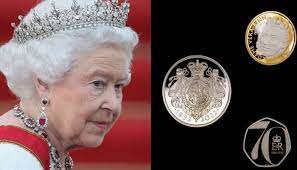 The Royal Mint has presented a one-of-a-kind commemorative portrait of Her Majesty the Queen to coincide with the release of the Platinum Jubilee coin series, which is the first collectable UK 50p to commemorate a royal occasion.

The special obverse design, by renowned artist John Bergdahl, portrays the Queen on horseback and will be struck on the ‘heads’ side of a new 50p and conventional £5 crown to commemorate the Queen’s 70 years on the reign.

Representing Her Majesty’s fondness of nature, the design is reminiscent of the equestrian designs for the 1953 Coronation and 2002 Jubilee crown pieces and has been personally approved by the Queen.

The collectable 50p baring the new design – and featuring the number 70 along with the Queen’s cypher designed by Osborne Ross on the opposite side – is available today from £7, celebrating 70 years.

“The Platinum Jubilee is an historic occasion and one that is particularly special for The Royal Mint, as the original maker of British Coins for 1,100 years.

“In celebration of this landmark occasion, the official Platinum Jubilee collection, including the new 50p and traditional £5 crown, features a unique commemorative design on both sides of the coin.

“Designed by esteemed artists, and made with original craftsmanship, Her Majesty’s Platinum Jubilee coins are enduring pieces of art that will be collected, cherished and passed down for generations.”

Limited-edition coins with a crowned portrayal of the Royal Cypher surrounded by floral emblems of the United Kingdom are also available at The Royal Mint as part of the Platinum Jubilee series.