Saboor gets uncomfortable during wedding celebrations 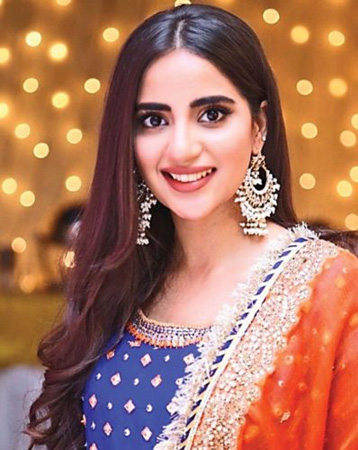 Actor Saboor Aly is all set to tie the knot on January 22 with co-celebrity Ali Ansari and their wedding celebrations are already underway.

A viral video of them celebrating in a function as part of the festivities made rounds on social media.

An Instagram page, sharing a still of the couple from an event, stated that the two were having a “serious discussion” with each other.

Saboor Aly, who is the sister of actor Sajal Aly, took to social media to give clarification regarding the reports.

The Mehmoodabad Ki Malkain star said that the two were discussing how uncomfortable they were as they were being filmed without their consent.

She wrote: “This serious discussion was actually about how me and Ali were uncomfortable of the people recording around us without our consent, but we still had a lot of fun! Thanks for all the love and concern!”

It is pertinent to mention that the celebrity couple exchanged rings back in May this year.

“With the blessings of our families I’m ready to jump into a new life with an amazing person,” the actor wrote on Instagram.

In September, she celebrated her fiancé’s birthday with not one, not two, but four surprise celebrations!