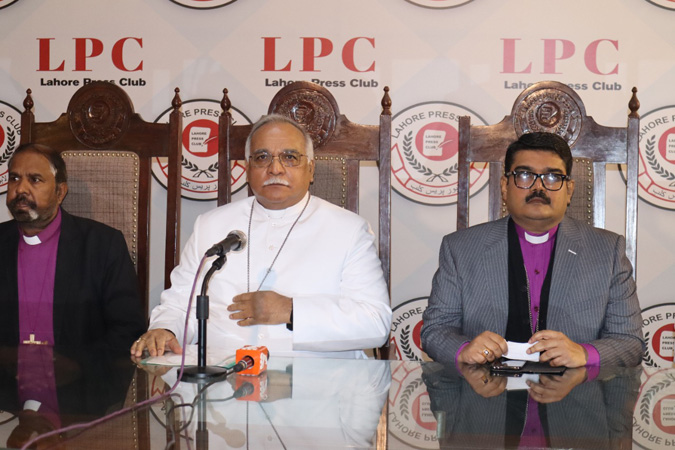 The Pakistani church leaders on Tuesday urged the world community to take notice of the growing incidents of religiously-motivated attacks on minorities in India, saying religious extremism was a threat to regional peace.

Speaking on the occasion, Bishop Marshall said the Pakistani church leadership was extremely concerned by the rise in attacks on Christians and other minorities in India.

“India takes pride in being the world’s largest democracy but its brazen violations of religious freedom have laid bare its claims of being a truly secular country,” he said.

Bishop Marshall said that the US Commission on International Religious Freedom in its recent report in 2021 had highlighted that the BJP-led government was promoting Hindu nationalist policies resulting in systematic, ongoing, and egregious violations of religious freedom which negatively impact non-Hindu religious communities, including Muslims, Christians, Sikhs, Dalits and Adivasis.

“The attacks on religious minorities and vandalism of minority worship places, the enactment of the Citizenship Amendment Act 2019 and persecution of Christians under the guise of action against religious conversions should be a cause of serious concern to the world,” he said, adding that the misuse of policies such as the Unlawful Activities Prevention Act and the Financial Contribution (Regulation) Act enabled the Indian government to silence or restrict individuals and NGOs from reporting on and combatting religious persecution.

Bishop Marshall also called for the protection of minorities in Pakistan, saying effective legislation was needed to save underage minority girls from being sexually exploited in the garb of religious conversion and marriage to their abductors.

“We have repeatedly called for stopping child rape in the name of religious conversion and demand that the government reconsider its decision to reject the anti-forced conversion bill. This is not a religious issue but a matter of protection of the girl child,” he said, adding that the church leadership had provided to the government a list containing the names of children allegedly abducted and forcibly converted to Islam last year but there has been no progress in this regard.

He also announced that the church has established a helpline where Christians can report their issues and get legal assistance.

Drawing attention to other issues facing the Pakistani Christian community, Bishop Marshall said that while the condition of Christians was much better in Pakistan than India, the community was faced with many challenges that needed the government’s immediate attention.

“Growing intolerance and misuse of the blasphemy laws is another cause of concern to us. We do not seek repeal of the laws but there is no deterrence against false accusations. We demand an extension in the laws that categorically prescribe that the State will punish false accusers of blasphemy instead of putting the onus of prosecution on those falsely accused of the crime,” he said, and reiterated that such cases be investigated by a special task force comprising army officials.

The church leader also condemned the publication of discriminatory job ads wherein only Christians are sought to fill positions of sanitary workers.

“It is extremely heart-wrenching for the entire community and the government must end this practice. Our people have contributed greatly in health, education, defense and other sectors but tagging Christians only for sanitation work is quite discouraging for the community,” he said.

The church leaders also criticized the results of the 2017 census and demanded a transparent and thorough enumeration of the Christian community in the next census. They also demanded strict implementation of the education and employment quotas for minorities in all government institutes and departments.

Bishop Leo Roderick demanded the protection of communal properties from the land mafia. He said that by empowering the provinces to issue NOCs, the government had opened a backdoor for such elements.

Bishop Samuel demanded that all missionary educational institutions nationalized in the 1970s be returned to the custody of the church authorities.