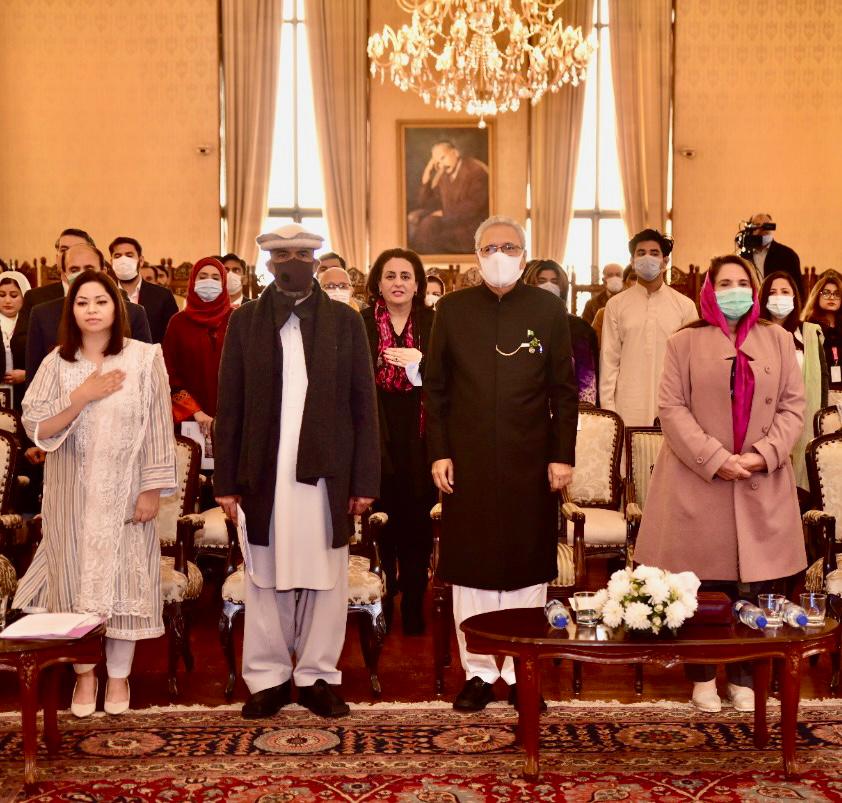 Pakistan Alliance for Girls Education in collaboration with Council of Islamic Ideology initiated the “Ulama – Ambassadors of Girls Education” campaign which was launched by President Dr Arif Alvi. Ulama at the national level participated in the campaign launch for the promotion of girls’ education and to end the disparities that exist in the education sector.
They also committed to become Ambassadors of Girls Education and to support PAGE, CII and the Government of Pakistan to raise awareness of the importance of education equally for both genders in light of Islam. Key Ulama of all sects from across the country were present at the launch event with the aim of fostering girls’ education in their respective areas.
The launch event started off with the recitation of Holy Quran followed by the welcoming remarks from Chairman Council of Islamic Ideology, Dr Qibla Ayaz. Dr Qibla Ayaz, thanked his excellency, the President of Pakistan, Dr Arif Alvi for launching the campaign and for supporting and promoting girls’ education in Pakistan. Being voice of the Ulama, Dr Qibla Ayaz stated that the Ulama are very much in favour of girls’ education across Pakistan and they will continue to promote girls’ education in their respective areas and regions with the aim to empower girls of Pakistan. Honorable Chairman CII, also shed light on the fact that the excellence of knowledge has been highlighted both directly and indirectly in Islam and that Islam does not give the message of opposing acquisition of education for girls but it promotes education of men and women equally.
The launch event proceeded with Executive Director, Pakistan Alliance for Girls Education, Fajer Rabia Pasha’s speech. Ms Fajer Rabia Pasha opened the speech by expressing that today is a historical moment for Pakistan. The launch of this campaign by the Honorable President of Pakistan, is not only evidence of Pakistan’s commitment to address gender disparity in education but to also engage all sections of the society in this process. She added that role of Ulama to address the current situation can not be ignored. In fact, the engagement of Ulama sends a positive message to the world. She said the current challenges demands a special focus on girls’ education, particularly improving their access to quality education facilities through creating an affable conducive environment for girls that tackles the social religious and socio-economic barriers, typically faced by the Pakistani girls. This is where the collaboration with Council of Islamic Ideology can make visible impact. Ms Fajer thanked the Ulama for their invaluable contribution and commitment for the promotion of girls education in Pakistan.
The launch event concluded with the keynote address from His Excellency, the President of Pakistan Dr Arif Alvi. In his keynote address, the president acknowledged and commended the efforts of Pakistan Alliance for Girls Education and Council of Islamic Ideology for promoting Girls Education across Pakistan by involving Ulama from all sects for advocacy. He further added that Islam has been accused of gender inequality a number of times, and the disparity in educational opportunities between men and women in many Muslim countries is often cited as a primary example. Islam was built upon one of the most important pillars of knowledge, which is why this is a sad reflection on Muslims and societies. There is no disagreement found within Islam on the acquisition of knowledge being obligatory and binding. He recognized that the promotion and betterment of status of Girl’s Education cannot take place without the support of Ulama. His Excellency, also added that including the promotion of Girls Education in Friday Sermons and utilizing mosques to educate the out of school children can contribute to the betterment of the overall status of Girls Education in Pakistan.
The event concluded with the digital formal launch of the campaign, Ulama – Ambassadors of Girls Education. News Desk