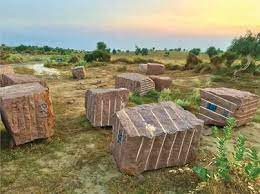 KARACHI: A suit against illicit precious stone excavation in the Karoonjhar hills of Nagarparkar was considered by a Supreme Court bench led by Chief Justice Gulzar Ahmed.

The petition was heard at the Karachi Registry by an apex court panel led by Chief Justice Gulzar Ahmed.

A massive excavation of Karoonjhar Hills has been underway to extract precious stones from the hills, petitioner pleaded in the court.

The court adjourned a further hearing of the case till Tuesday (tomorrow).

It is to be mentioned here that a division bench of the Sindh High Court (SHC) in November 2019 stayed excavation of stone in Karoonjhar hills of Nagarparkar while issuing notices to the federal secretary of natural resources, secretary of forest and wildlife, Frontier Works Organisation (FWO), secretary of mines and minerals and different marble companies as respondents.

Karoonjhar is a historical mountain of Tharparkar. The hills have been covered with the world’s unique granite rocks and they constituted the oldest rocks of earth’s crust and china clay.

The hills were home to animals, birds and rare species, including peacocks, deer etc. It was the only source of water for humans, birds, animals in Nagarparkar.

It also stood as a symbol of civilisation of indigenous communities and their rituals, culture, customs, traditions, folklore, songs, tales and thousands of years’ religious harmony.

For years, the hills have been threatened by illegal stone cutting for the selling of precious stones, which has been aided by powerful politicians and others.

For years, civil society organisations have campaigned to have it recognised a world-historic site so that thousands of years of Karoonjhar culture can be preserved.