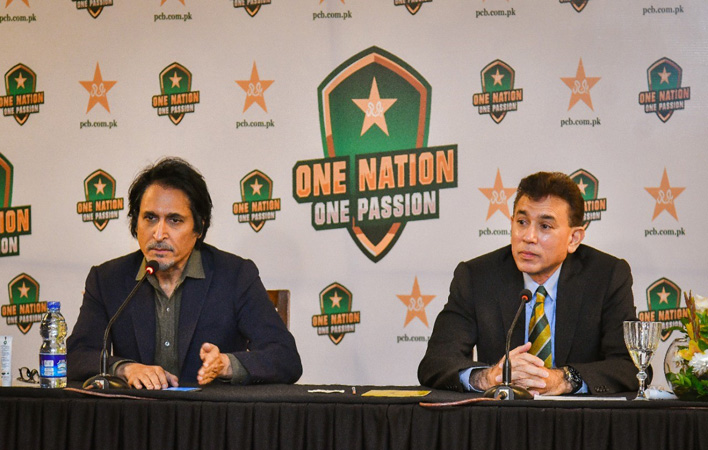 KARACHI: Pakistan Cricket Board (PCB) chairman Ramiz Raja said on Wednesday that he would not “rest” until Pakistan becomes a world-class team and defeats Australia at their home turf. The former Pakistan captain was addressing a press conference here with newly-appointed chief executive officer Faisal Hasnain. Raja spoke on a wide range of issues, including the dismal attendance during the recently-held Pakistan-West Indies series, the need for permanent coaches and team selection. The PCB chairman said that the team were on an impressive trajectory but acknowledged that “more work needs to be done.” “Pakistan have to improve its fielding a lot,” he noted. “I have been working at the PCB for the past three months yet it feels like 30 years have passed. I now realise that holidays are a huge blessing.”

Ramiza spoke about his performance so far as the PCB chairman, saying that he raised his voice at the Asian Cricket Council after New Zealand and England withdrew from the Pakistan tour. “I said during the meeting that if any Asian country is mistreated, everyone should raise their voices against it,” he disclosed. He said that he did not have any “final opinion” when it comes to coaches. “We would be trapped if we roped in coaches for long-term contracts. We need specialists, not coaches,” he added. The former Pakistan cricketer said that it would be better if coaches were employed at the basic level to groom future stars, adding that no decision had been taken to either appoint a local or foreign coach yet.

No tolerance policy: Ramiz spoke about Pakistan leg-spinner Yasir Shah, who was named in an FIR of a minor’s rape. Without taking his name, he said that the PCB had a “no tolerance policy” in such matters and that an investigation was underway to uncover the truth related to the case. Ramiz said that the players representing Pakistan were on ambassadorial positions, adding that they had been trained who to pick and socialise with. He said that the players’ salaries had been increased so that they can stay in five-star accommodations where there were no distractions. “Each player earns Rs50 to 60 lacs per month,” he disclosed. “The PCB plans to invite scholars to give players lectures on morality. We have invited Mustansar Hussain Tarrar and Ashfaq Ahmed to talk to players on how to handle fame and educate them that making money should not be their focus. We need to work on them more,” he added.

Additionally, the PCB chairman said that the media made headlines on the case prematurely. “There should be an investigation first. This period should have been a calming period,” he observed, calling on the media to play a more responsible role when such incidents occur.

67th BoG meeting held in Karachi: Meanwhile, the 67th meeting of the Board of Governors (BoG) of the Pakistan Cricket Board was held on Tuesday. In line with the PCB’s strategy of investing in youth and pathways cricket following a bottom-up approach, the BoG backed and supported the PCB chairman’s two new initiatives: Pathway Junior Contracts and Pathway Cricket Foundation. Through strategic partnerships, the PCB will award 100 contracts to the most outstanding and bright cricketers under the ages of 11, 14, 16 and 19. Under this programme, the talented young cricketers will receive a stipend of PKR 30,000 per month and also earn 100 percent scholarship, which will provide them access to cost-free education at a leading local educational institution that, in turn, will help them become wholesome individuals. Again through a strategic partnership, the PCB will appoint highly qualified resident foreign coaches at the National High Performance Centre. These coaches will work very closely with 100 teenage cricketers to nurture and develop them and prepare them for future events, including the U19 PSL, which is marked for October 2022. These coaches will also be available to assist and help elite and emerging cricketers.

PCB chairman Ramiz said: “In order to create a long-term sustainable process, it is essential that we continue to tap into, stimulate and motivate the youth’s passion and talent for cricket, whilst focusing on a bottom-up approach towards participation and making attempts to bridge the wide divide between pathways and Pakistan cricket journey. We feel that our Junior Contracts and Cricket Foundation initiatives will now play a decisive role in ensuring that raw talent from even the remotest and less privileged of areas in Pakistan reaches its full potential.”

The BoG approved the club scrutiny procedure for 3,822 clubs, who took part in the First Registration of Cricket Clubs, across 90 City Cricket Associations in the first half of 2022. Taking into consideration that a long and demanding international cricket period awaits the Pakistan men’s cricket team, an extensive discussion on the players’ workload handling took place. The BoG requested the PCB management to explore options and submit suggestions on how the elite cricketers can preserve their energies for Pakistan by remaining supremely fit, injury-free and fresh. The PCB chairman highlighted Babar Azam’s authority, leadership and impact on the side as one of the turnaround factors. He also credited the calm influences of Saqlain Mushtaq (interim head coach), Matthew Hayden (batting consultant) and Vernon Philander (bowling consultant) as the other contributing factor as the trio were able to create a relaxed team environment that, in turn, allowed the team to excel, particularly during the ICC Men’s T20 World Cup 2021.