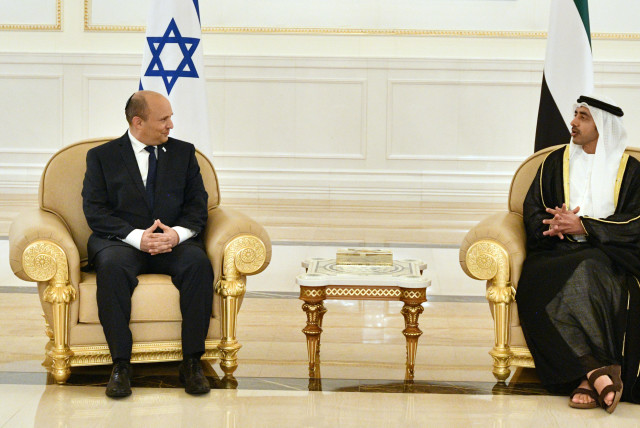 Israeli Prime Minister Naftali Bennett met Abu Dhabi’s crown prince on Monday after becoming the first leader of the Jewish state to visit the United Arab Emirates, a year after the establishment of ties.

Bennett met Crown Prince Sheikh Mohammed bin Zayed Al-Nahyan at his private palace, Israeli officials said, following the premier’s arrival in the Emirati capital late on Sunday. His visit comes just over a year after the wealthy Gulf state broke with decades of Arab consensus and forged diplomatic ties under a series of US-brokered deals known as the Abraham Accords.

Israel is also making a diplomatic push against renewed international talks with Iran, its arch-foe, over the Islamic republic’s nuclear programme. Bennett, who was expected to focus on trade links, according to his spokesperson, said his visit reflected a “new reality” for the region.

“In my opinion, this is… the new reality this region is witnessing, and we are working together to ensure a better future for our children,” he told the UAE’s official WAM news agency. The volume of mutual trade had grown within a few months, “with limitless future opportunities to develop it,” he added.

“Israel, like the UAE, is a regional hub for trade. Our cooperation provides unprecedented economic opportunities not only for us but for more countries.” Bennett was also scheduled to meet the UAE’s technology and transport ministers during his visit, Israeli officials said.

While he is the first Israeli prime minister to visit the UAE, Foreign Minister Yair Lapid made a landmark trip in June, opening an embassy in Abu Dhabi and a consulate in Dubai. The UAE opened an embassy in Tel Aviv in July.