* Imran Khan says as Punjab government will spend Rs 320 billion on health insurance programme, the facility will be available to every citizen of Punjab, KP, GB and AJK 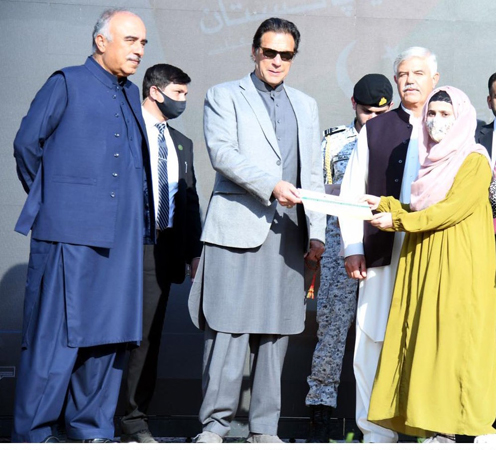 He said that as Punjab government will spend Rs 320 billion on health insurance programme, the facility of health insurance will be available to every citizen of Punjab, Khyber Pakhtunkhwa, Gilgit Baltistan and Azad Kashmir.

The prime minister expressed these views while addressing the launching ceremony of Micro Health Insurance Program under Kamyab Pakistan Program, distribution of cheques among imams of jamia mosques under KP government’s financial assistance program, students under Ehsas Education Program and poor women under Kifalat Program here at the Governor House.

In his address, the prime minister said that PTI had started its political journey with a clear goal to make Pakistan a true Islamic welfare state as envisioned by our forefathers in Objectives Resolution. He said when PTI came into power in 2013 in Khyber Pakthunkhwa, welfare oriented programs like Health Insurance Project were prioritized to benefit poor people and low income strata.

The development projects, reforms initiatives and dedicated party leadership have resulted into unprecedented two-third majority of PTI in 2018 election in the province. Referring to a UNDP report, the prime minister said significant reduction of poverty has been witnessed in Khyber Pakthunkhwa during 2013-18 owing to the PTI government’s prudent policies. He said PTI government has been succeeded in improving governance, restoring law and order situation and boosted morale of police force that was on the forefront in war against terror in 2013 in KP. Despite the coalition government during 2013-18 in KP, he said 30 per cent health insurance have been provided to people.

He congratulated KP government for extending free health insurance to 100 percent population. Under the Kamyab Pakistan Program, micro health insurance would provide free medical services worth Rs 1 million annually to 7.5 million families in Khyber Pakhtunkhwa. He said health insurance program would also be launched in Punjab from first January and the entire population of the province would be covered in three months. The government of Balochistan, Azad Kashmir and Gilgit Baltistan also intended to launch this mega program. “Free health insurance card was a great blessing for poor people and low income groups.” He said universal free health coverage in KP was unprecedented as such facilities were not available in the developed countries. Appreciating the performance of NCOC, the prime minister said the country had effectively tackled corona virus pandemic that created havoc in world including India, adding the pandemic have severally affected supply food chain in world and regional countries that caused inflation, price hike and increased prices of petroleum, gas and food commodities in Pakistan.

He said anti-Covid policies of the government had saved people from hunger, starvation and many precious lives besides averting the downfall of economy.

Prime Minister Imran Khan said the government had announced a historic Ehsaas food subsidy package worth Rs120 billion that would benefit over 20 million households. The Ehsaas Ration Discount Program will provide groceries to about 20 million families by covering 130 million people and giving them 30 percent discount on purchase of essential food items, adding about 53pc of the country’s total population would be benefited. Families with less than Rs50,000 per month income are eligible for Ehsas Ration discount program.

The prime minister urged the elected representatives to visit their constituencies and informed people and owners of grocery stores about benefits and procedures of the Ehsaas Ration Program’s registration. He said another welfare program was being launched to benefit about around two million poor families, adding interest free loans up to Rs five lakh to each family, technical education and Rs2.7 million for construction of house to live a prosperous and dignified life. He said the heavy loans borrowed by previous governments have overburdened the country’s economy and added the major chunk of revenue generated by the government was being spent to pay interest on these loans.

The prime minister said that 63 lakh scholarship with allocation of Rs47 billion are being given to students on merit basis, adding data of the students and scholarship were being compiled by the Prime Minister’s Office so that no deserving student could be deprived from the facility.