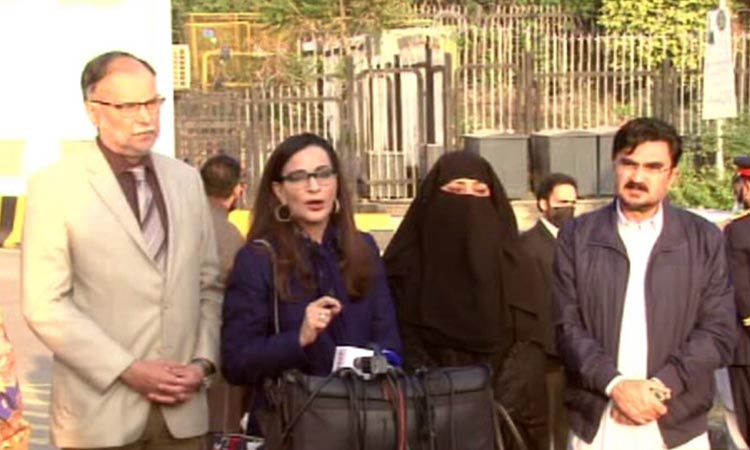 The joint opposition Thursday lashed out at the government for bulldozing more than three dozen bills in the joint sitting of Parliament, terming the move “worse than martial law” and also expressed hope that the courts would now uphold the Constitution in line with the opposition’s aims to challenge the bills.

Leaders of opposition parties said this in a joint press conference here at Parliament house.

Secretary General PML-N Ahsan Iqbal said that it was the “blackest day” in the history of Parliament, adding that there was no such precedent in dictators’ eras. In Wednesday’s joint session of Parliament, a record 33 bills were passed in a single day, including the controversial bills related to the use of electronic voting machines (EVMs) and the International Court of Justice. Among the bills passed, the most crucial were amendments to the Elections Act, 2017, allowing the use of electronic voting machines (EVMs) and giving overseas Pakistanis the right to vote in general elections. The PML-N leader expressed the hope that the courts would now uphold the constitution in line with the opposition’s aims to challenge the bills in court. Earlier, the opposition parties decided to challenge the approved legislation at the apex court.

“The Election Commission is a major stakeholder, it is responsible for holding free and fair elections,” he said, adding that by passing the laws, the government had build the grounds for rigging in the next elections. Iqbal, shedding light on EVMs, said they are vulnerable to rigging even if they do not operate online. “The machines will work under the government’s supervision, they can be tampered with.”

The PML-N leader also claimed that the machines might affect voter secrecy, and that the government had even then adamantly bypassed the Election Commission of Pakistan (ECP) and Senate.

He also cautioned the ECP that it would be going against its duties to hold free and fair elections in the country if it falls under the pressure of the government. It must be recalled here that government ministers had levelled several allegations against the body, but later apologized.

The PML-N leader said any law made without consultation was not acceptable to the opposition.

Speaking at the occasion, Senator Sherry Rehman of PPP said that the events that transpired in the assembly were not even witnessed during “Musharraf’s era, it was worse than martial law.”

The PPP lawmaker said the government had “trampled” democracy in Parliament by getting the bills passed through an “artificial majority”. “We will challenge these bills at every forum possible,” she said. Former prime minister and PML-N leader Shahid Khaqan Abbasi suggested that a constitutional amendment be made to apply Article 6 of the Constitution – which deals with treason – on anyone found “stealing the elections”.

The PML-N leader made these remarks referring to a controversial bill on electoral reforms passed during the joint sitting of parliament a day ago, which paved way for the use of electronic voting machines (EVMs) in the next elections. The legislation was strongly rejected by the opposition, which alleged that the government was trying to rig the elections through the use of electronic machines, says a media report. Talking to the media in Karachi, Abbasi said “elections are [often] stolen here and the only way to ensure free and fair elections in Pakistan is to bring a constitutional amendment.” He accused the government of attempting to bring the Election Commission of Pakistan under its control through the passage of the EVM bill. He said the electronic voting machines have failed worldwide, while in Pakistan the government was adamant to waste public money on such experiments. “The electoral process in Pakistan is not controversial, but the mechanism to hold polls is. But, we are now even making election process tainted,” he added. He recalled that the National Assembly speaker had sent opposition parties a letter seeking consensus of all political parties for passage of bills in the parliament.

“We agreed to it and said the so-called electoral reform bills should also be sent to Parliamentary Committee on Electoral Reforms in view of the practice of the past. But the speaker did not respond to us on this,” Abbasi moaned.