Karisma says her ‘family lunches are the best’ 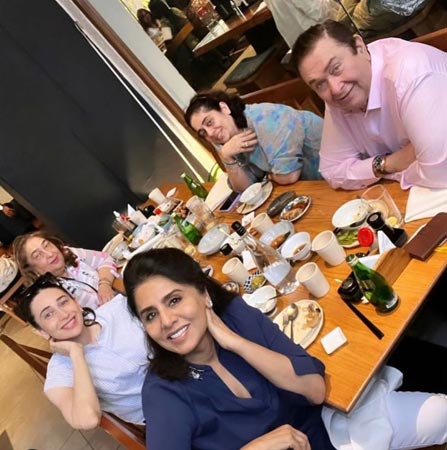 It was a mini Kapoor reunion on Wednesday. Actor Karisma Kapoor gave a glimpse of her lunch outing with her father Randhir Kapoor and aunts Neetu Kapoor, Reema Jain and cousin Natasha Nanda. “Family lunches are the best. Missing a few,” Karisma wrote in the caption. According to the tags, the family lunch took place at Izumi restaurant in Bandra known for its Japanese cuisine. Neetu Kapoor posted the same photo on her Instagram handle and wrote, “These outings are so special nowadays.” Karisma’s cousin Riddhima Kapoor Sahni was all hearts for the picture. Karisma shared another click in her Instagram stories too. Karisma Kapoor starrer Raja Hindustani completed 25 years this week. On the occasion, Karisma shared a montage from the film and even revealed an interesting secret. In the caption, she mentioned how the film’s popular song “Aaye ho meri zindagi mein” is one of her personal favourites. The actor said that performing the song as a ‘young girl’ made her ‘feel a rollercoaster of emotions’.