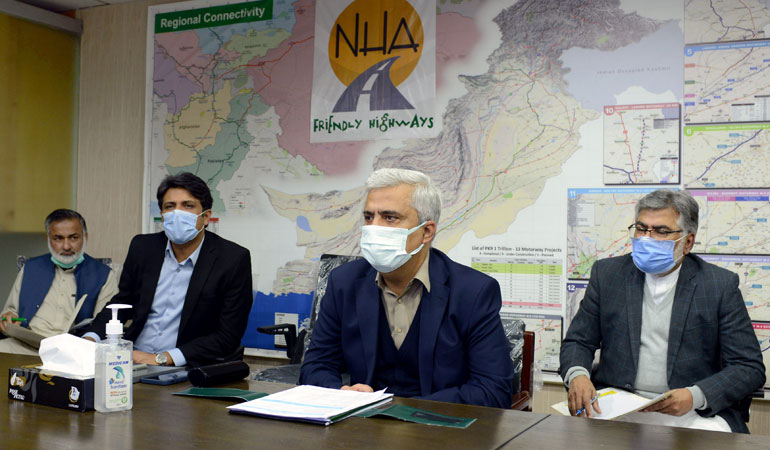 Chairman National Highway Authority Capt (r) Khurram Agha held E-Kachehri at headoffice of the Authority through NHA official Facebook Page and answered to the questions raised by the people all over the country and issued on spot directions to undertake steps for earlier solution of public complaints.

In his opening remarks, Chairman National Highway Authority Capt ® Muhammad Khurram Agha gave a detailed description of Authority’s ongoing and future plans and received public proposals on them. He also informed people regarding responsibilities and working scope of NHA. He also answered to complaints about toll plazas, construction, maintenance, rehabilitation and dualisation of roads schemes throughout the country. He said, Sukkur-Hyderabad motorway project will be undertaken on Public Private Partnership (PPP) basis and last date for bid submission is November 18, 2021. NHA is endeavoring to start work on this project at the earliest. Giving answer to a question he said, NHA has completed its work on Chitral-Shandur Road. He said, construction on Hakla-D.I.Khan motorway is in last stage and it will be opened to traffic after inauguration. He said, a Mosque will also be built in Rest Area of Hazara Motorway (E-35). On public complaints he directed to send NHA teams to delayed projects to set the matter right. Speaking about afforestation, Chairman National Highway Authority Capt ® Muhammad Khurram Agha said, saplings are being planted along mega projects across the country. Presently construction work on 16 projects has been started in Balochistan including Nokundi-Mahskhel project. Maintenance work of N-5 at Saqidabad will be started soon. He further informed, work on Hoshab-Awaran Road (M-8) has also been started while work on Awaran-Naal Project will be started soon. Likewise work on Dera Murad Jamali has also been started. PC-I for Tarnol-Fateh Jang road has been forwarded to Planning Commission. Construction activity will be started on Quetta-Karachi road project by next month, he hoped.