Nadia Hussain and Komal Meer talk about crying during filming 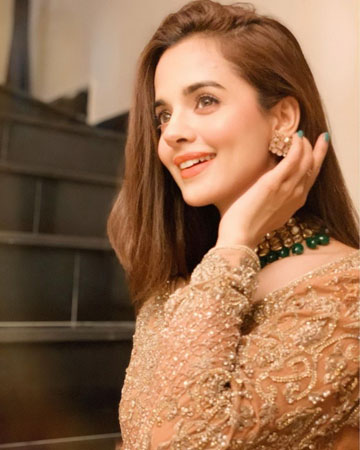 Actors Nadia Hussain and Komal Meer revealed the secrets when it comes to crying while filming drama and film scenes. The two actors, who are currently starring in ARY Digital serial Benaam, came as a guest on the channel’s morning show Good Morning Pakistan, hosted by Nida Yasir. Komal Meer said that there is no one from their side who share remedies or tips on how to cry during the filming.

She added that there are instances when there are mishaps when it comes to makeup but the artists are there to handle the situation.

Nadia Hussain, speaking about the perception of using glycerin for making the celebrities tearful, added that if you are wearing contact lenses – the method is still effective but it requires a little more.

When speaking about applying scented balm near the eyes, she questioned that how many times it can be done in a single take.

Nadia Hussain, on the other hand, claimed that the balm method doesn’t affect her at least.

Benaam was premiered on November 2. The serial tells the story of two twin sisters Aiza and Aimal, who are orphans and living with their stepfather, despite having a real father, who left them before they were born. Its star-studded cast includes Komal Meer, Anoushay Abbasi, Shazeal Shoukat, Waseem Abbas, Babar Ali, Nadia Hussain, Noor Hassan, Saad Qureshi, Imran Aslam, Ghana Ali, Humaira Bano and others. Benaam is co-written by Tahir Nazir and Seema Sheikh. It is directed by Ali Masud Syed.