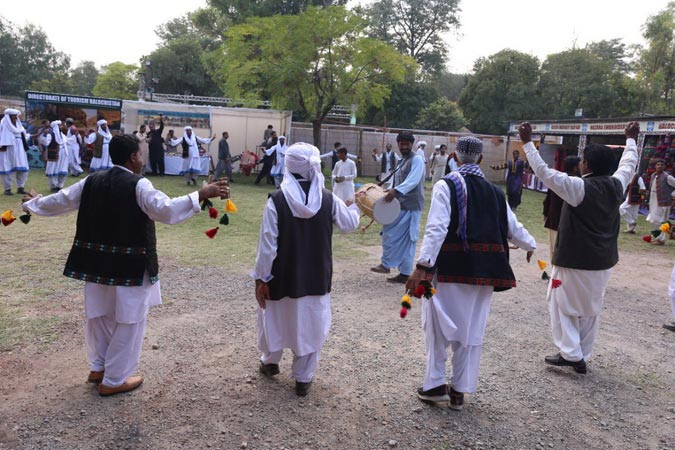 The National Institute of Folk and Traditional Heritage (NIFTH)/Lok Virsa held the inaugural ceremony of the seven-day Lok Mela on Monday at Lok Virsa, Islamabad. Minister for Federal Education, Professional Training, National Heritage & Culture Shafqat Mahmood was the chief guest on the occasion.

According to the tradition, Lok Mela opens with a Dastarbandi/ Chardarposhi of established master artisans and folk artists. “Dastarbandi” is a symbol of Lok Virsa’s sustained campaign to keep the heritage of Pakistan alive and continuing. When you place a turban or chaddar on someone’s head, you have placed your complete trust in that person’s wisdom and his stature in life. This is Lok Virsa’s way of showing that the craftspeople and folk artists have importance in national life and they have made a great contribution to our culture. This year master artisans of pottery Niaz Ahmed, Fouzia Naheed, doll maker and renowned folk artist Bushra Sadiq were honoured.

As a positive step towards ensuring that artistes and their performances are treated with utmost respect, this year the Lok Virsa administration has moved dance/ music pavilions outside of the shop area. Proper pavilions have been allotted to them at entrance gates as opposed to them having to perform in a constricted dusty, noisy space with the constant movement of customers around the shops. The Lok Mela artistes have also been allotted a proper stage where performers from all six provinces/ regions have been given a maximum of one hour to perform one by one, to ensure they don’t tire out and their dignity is kept intact. Since Executive Director Lok Virsa Talha Ali Kushvaha is a performing artist himself, he holds artistes in the highest regard.

In his address, Federal Minister Shafqat Mahmood welcomed all the participants of the mela hailing from different parts of the country. He said that he always feels delighted while visiting Lok Virsa as the institute is determined to uphold the conservation, preservation and propagation of folk cultural heritage of Pakistan. This festival is a part of the government’s initiatives that encourages steps which are

directly related for the betterment of the people of Pakistan. The central focus of the festival is rural Pakistan. The direct beneficiaries are master craftspeople, folk artists, rural musicians and other performers from each and every corner of the country. The festival serves to disseminate the dynamic creativity of our countryside and would give rural folk a pride in their identity. He thanked executive director Lok Virsa and his team for holding such a beautiful event and ensured cooperation of his ministry.

The National Institute of Folk and Traditional Heritage was established in 1974 with the mandate to promote cultural heritage and its role in economic reforms, investment, industry, education, literature, poverty alleviation, human rights and human development.