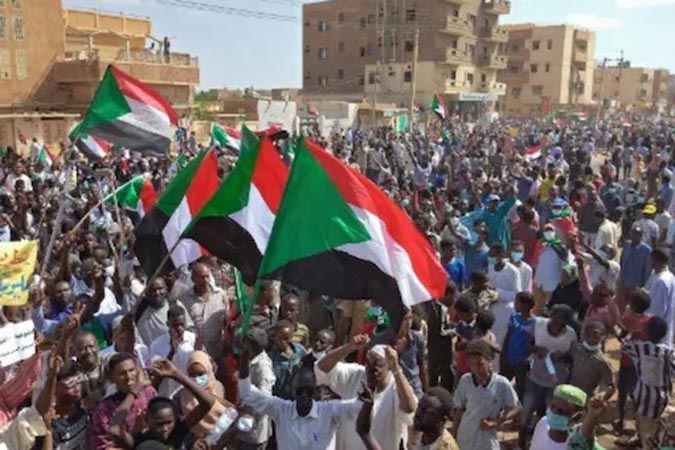 Sudanese security forces on Saturday killed two protesters during mass anti-coup rallies, medics said, despite warnings from global powers who had urged restraint by the military.

“Two demonstrators were killed in the city of Omdurman by the putschist military council,” the independent Central Committee of Sudan’s Doctors said in a tweet. The latest killings — in Khartoum’s sister city — bring the death toll since the outbreak of anti-coup protests on Monday to 11, with about 170 others wounded.

Saturday’s protests came almost a week after the military last Monday detained Sudan’s civilian leadership, dissolved the government and declared a state of emergency, leading to a chorus of international condemnation — and warnings against using force.

“No, no to military rule”, and “We are free revolutionaries and we will continue the road” of democratic transition, protesters carrying Sudanese flags chanted in Khartoum.

Despite bloodshed throughout the week, organisers on Saturday aimed to stage a “million-strong” march against the military’s power grab, similar to mass protests that led to the toppling of autocrat Omar al-Bashir in 2019.

The growing demonstrations occurred throughout the Khartoum area including in Omdurman and Khartoum-North, while in the Red Sea city of Port Sudan protesters in their hundreds blocked a street, according to witnesses and AFP correspondents.

Protesters also gathered in the eastern state of Kassala. “We want a civilian rule, and this time will not accept to share it with the military. It has to be civilian 100 percent,” said Hashim al-Tayib, a protester in southern Khartoum.

Sudan had been led since August 2019 by a civilian-military ruling council which was supposed to last three years and lead to full civilian rule. The arrangement came under increasing strain prior to the coup, which analysts said aimed to maintain the army’s traditional control over the northeast African country.

Other protesters held posters of Prime Minister AbdallaHamdok ousted by the military and effectively held under house arrest, with slogans saying, “Don’t back down.”

In east Khartoum, protesters set car tyres on fire and held posters reading, “It’s impossible to go back”, while in the city’s southern district banners expressed concern that the country might return to Washington’s state sponsors of terrorism list.

That designation, accompanied by years of crippling sanctions, was lifted only last December which opened the way to debt relief and renewed largesse from the International Monetary Fund and World Bank. After the coup, the World Bank suspended aid to Sudan in a heavy blow to a country already mired in a dire economic crisis that began under Bashir. Other protesters called for “freedom to the members of cabinet” who have been detained since the putsch.

Several pro-democracy activists have also been arrested following the takeover led by General Abdel Fattah al-Burhan, Sudan’s de facto leader since the ouster of Bashir which came at the cost of more than 250 lives.

On the eve of Saturday’s rallies, a US official put this week’s death toll at between 20 and 30, and called on the security forces “to refrain from any and all violence against protesters and to fully respect the citizens’ right to demonstrate peacefully.”

“The security services and their leaders will bear responsibility for any violence towards any protesters,” he said on Twitter.

On Friday, UN Secretary-General Antonio Guterres urged the military “to show restraint and not to create any more victims.”

Security forces had deployed in large numbers and blocked bridges connecting the capital, Khartoum, with its sister cities.

Before the protests began Sudan’s information ministry, which backs a civilian government, warned in a statement that coup authorities were planning to engineer “instances of destruction to justify its excessive violence”.

Protesters during the week had, in some cases, already been met with tear gas, rubber-coated bullets, and live rounds.

Shops have largely been shuttered, and government employees have refused to work as part of a campaign of civil disobedience.

Finance Minister Gibril Ibrahim, who leads an ex-rebel group aligned with the military, emphasised protesters’ right to demonstrate but suggested they were the ones prone to violence.

“Destroying sidewalks, electricity poles, and damaging properties which were built by the people has nothing to do with peaceful expression,” he said in a tweet.

Prior to Saturday’s rallies Sudan state TV aired testimonies from military men alleging that protesters wounded them during clashes, and showed ordinary Sudanese hailing the army.

Burhan, a senior general under Bashir’s three decades of iron-fisted rule, has insisted the military takeover “was not a coup” but only meant to “rectify the course of the Sudanese transition”.

One of the world’s least developed countries, Sudan has enjoyed only rare democratic interludes since independence in 1956 and spent decades riven by civil war.