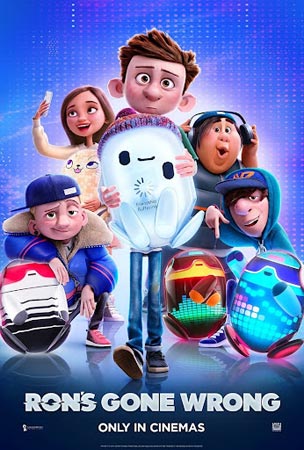 The concept of friendship, loneliness, social media, big tech, investors in turtlenecks and investors in sweatshirts, are all up for consideration in Ron’s Gone Wrong.

It means that this film couldn’t have come at a better time than now, when a fire has been lit under Facebook by the skeletons being dragged out of its deep, deep closet.

Ron’s Gone Wrong doesn’t leave anything to chance. From Bulgarian immigrants with their worst Communism fears, to an empire that is a Capitalist’s heaven, there is everything for everyone – and much to spare. The problem with Ron’s Gone Wrong is that there is so much happening, to so many people, not to say the bots that are their best buddies, that it is hard to believe the film really cares for anything at all.

These bots have been designed by a ‘Bubble Network’ as a child’s best friend. With a hand match, the bot knows everything about a child and proceeds to accordingly be his or hers constant companion. In function, think of a bot as a mobile phone with an oval surface and flippers for hands and feet, who posts your selfies, checks out your followers, packs a world of information and can even give you a space experience should you want one. When the children hang out together, it is their bots who have sifted through the company, to pick out those best suited to each other.

Enter Barney, the only boy without a Bubble Bot of his own. The amazingly sweet-natured kid of indeterminable age does little more than complain feebly to his father and grandmother. Life can be cruel for such oddballs. We know this from numerous Hollywood films, but even without them, it is hard to fathom a family who would not realise that their little one might be traumatised as others his age flaunt their friend bots and even get the same to school.

When Barney does acquire a bot that is partly broken due to a fall, and names it Ron, their exploration of friendship kindles some sparks here and there. However, the film constantly moves away from them, leaving no time for them to grow on us. Of the many, many other children and their many, many bots that flood the screen, only Savannah who is constantly seeking social media followers makes an impact.

The inventor, it turns out, is a Peter Pannish-adult called Marc who could have done with some company growing up. Don’t you wish that was true for all the Marks of the world?