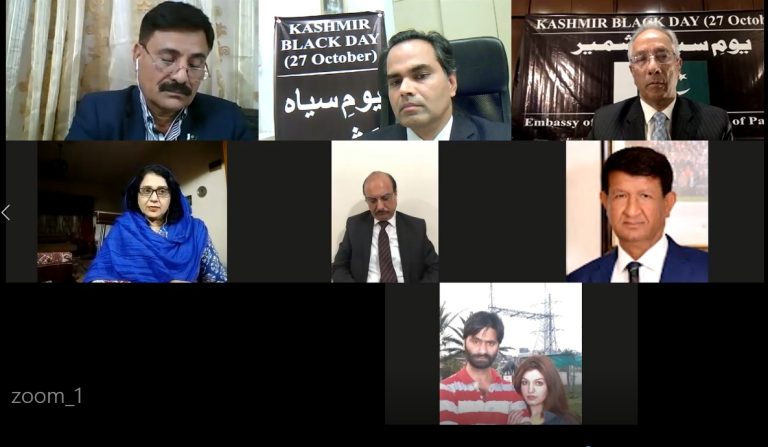 VIENNA: The members of Pakistan and Kashmiri diaspora in Austria and Slovakia on Friday called upon the international community to notice the plight of people in Indian Illegally Occupied Jammu and Kashmir (IIOJK) and work towards the resolution of the longstanding dispute.

In their remarks at a seminar organised by the Embassy of Pakistan in Vienna to mark the Kashmir Black Day, the speakers highlighted the various dimensions of the Jammu & Kashmir dispute.

The objective of the webinar was to condemn Indian actions of 27th October 1947 and continued state terrorism in IIOJK as well as to urge the international community to raise its voice in support of the long-suffering people of IIOJK.

Attorney at Law and Convener of All Parties Hurriyet Conference, Islamabad, Syed Faiz Naqshbandi focused on the mass human rights violations and draconian laws which were being used to crush the Kashmiris’ struggle for the right to self-determination.

Director at the Institute of Strategic Studies Islamabad Dr Saif ur Rehman Malik focused on the illegal and unilateral action taken by India in August 2019 which had further exacerbated the plight of the people of the Indian Illegally Occupied Jammu and Kashmir (IIOJK).

Former Vice Chancellor of Sargodha University, Dr. Ishtiaq Ahmad said that India engaged in good faith efforts aimed at resolving the Jammu & Kashmir dispute in accordance with the wishes of the Kashmiri people.

Professor and the Dean of Social Sciences at the International Islamic University, Islamabad Dr. Amna Mahmood pointed out that the reign of terror inflicted on the people of IIOJK had exposed India’s hollow claims of being the largest democracy in the world.

Mushaal Hussein Mullick, prominent Kashmiri activist and the wife of Mohammad Yasin Malik, Chairman of the Jammu Kashmir Liberation Front said despite their immense suffering, the courage and will of the women of Kashmir remained unbroken. She said the Bharatiya Janta Party regime in India was trying to render the people of IIJK leaderless by targeting their leadership and was also taking measures to alter the demographic structure of the region.

Ambassador Aftab Ahmad Khokher paid homage to the sacrifices rendered by the valiant people of IIOJK and said that the leadership and people of Pakistan remained steadfast in extending moral, political, and diplomatic support to them in their just struggle for the right to self-determination.

He also read out the Kashmir Black Day messages of the President, Prime Minister, and Foreign Minister of Pakistan.