* Maryam says Nawaz's enemies have faced 'exemplary defeat' as she slams the govt over increase in prices of utilities and POL products
* Fazl asserts that PDM movement will go ahead, saying the time is ripe to take to the streets 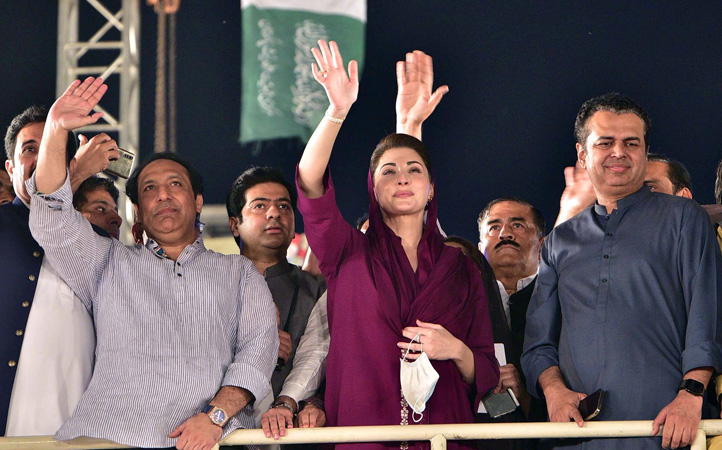 Accompanied by PML-N leaders Marriyum Aurangzeb and Rana Sanaullah on stage, Maryam said that former prime minister Nawaz Sharif’s opponents had suffered exemplary defeat as she slammed the incumbent government for the hike in prices of utilities and petroleum products. Recalling prices in in Nawaz’s tenure as PM, she said sugar was Rs50 per kg then, but now after three years, it had crossed Rs120 per kg, while electricity prices had shot up from Rs10-11 per unit to Rs25 per unit.

“There was a man named Imran Khan, who used to say when flour becomes expensive, when sugar prices rise, when rates of electricity and petrol rise, know that your prime minister is a thief,” Maryam said.

“So who is the thief now?” she asked a charged crowd. Maryam also criticised the government for the dengue outbreak, particularly in Punjab. “The entire world is facing coronavirus, but now because of their [government’s] incompetence, people are dying of dengue,” she said. “There is no one here like Shehbaz Sharif who used to visit hospitals,” Maryam added. Further flaying the government, Maryam said it had failed to provide electricity to people during summer and gas during winter.

“This is where this government stands,” she added. “And then, Imran Khan used to call Nawaz Sharif a thief. But time has proved there’s not a man more honest than Nawaz Sharif or Shehbaz Sharif in Pakistan’s history.”

The PML-N vice president went on to allege that the PTI government had deliberately delayed the procurement of the liquefied natural gas and bought the commodity at a high price. “This is why you have costly electricity and face load shedding today,” she said, addressing the crowd at the rally. Maryam added that if she would start speaking about Imran Khan’s corruption and scandals, “It will be midnight, but the stories of his corruption will not end.”

She also lashed out at the government over its decision to keep information about gifts received by PM Imran from foreign heads of states and governments and other dignitaries confidential.

Referring to Pandora Papers – an investigation on financial secrets held by high-profile individuals across the world – she said the name of Prime Minister Imran Khan and those of other PTI members had been included in the list of persons owning offshore companies. “But here, the nation was told that Imran Khan’s name is not included in Pandora Papers. Have you ever heard [anyone saying] that the leader of a pack of thieves is an honest [man]?” she remarked.

Maryam questioned why there was no hue and cry over Pandora Papers, as had been witnessed following Panama Papers. She also referred to the recent controversy and speculation over the appointment of the Inter-Services Intelligence director general, saying that Imran Khan had made a mockery of a national institution. Concluding her address, she urged the nation to “rise [against the government] and change your fate”.

“Rise for your future generations, rise to change the fate of Pakistan,” she said. It is interesting to note, however, that PML-N President Shehbaz Sharif did not deliver a speech and was neither seen attending the rally. Earlier, the PML-N’s official spokesperson also could not confirm his participation.

JUI-F chief Maulana Fazlur Rehman, while addressing the rally, said the PDM movement will go ahead, adding that the time was right to take to the streets instead of only organising rallies against the PTI-led government.

In this day and age, he said, the economic stability guarantees the country’s survival and added that Soviet Union was “erased from the world’s map due to economic crisis”. “I have never seen such a greedy and stupid person in my life,” said Fazl, accusing PM Imran of selling an expensive watch given by a foreign country head as a gift.

Major political leaders and common Pakistanis were up in arms after the government announced a massive increase in the prices of petroleum products. According to a notification issued by the Ministry of Finance on Saturday, the price of petrol has been increased by Rs10.49 per litre, high-speed diesel by Rs12.44 rupees, kerosene oil by Rs10.95 rupees and light diesel oil by Rs8.84 per litre.

The notification further said that in the current scenario, the government has absorbed the pressure and provided maximum relief to consumers by keeping the Petroleum Levy and Sales Tax to a minimum. Soon after the announcement, top political leaders and opposition parties condemned the government’s move and demanded Prime Minister Imran Khan’s resignation.

PML-N President Shahbaz Sharif termed the increase as “utterly shameful” and said that the latest hike, along with the petrol bomb, will push people to the brink of starvation.

“No words to describe the extreme cruelty this selected PTI regime has inflicted on people in the form of yet another increase in prices of items of daily use,” the PML-N president said. Shahbaz Sharif said PM Imran Khan has no right to remain in office and demanded his resignation.

PPP announces protest: Meanwhile, the PPP not only assailed the hike, but went on to announce a protest against the ongoing wave of inflation in the country.

In a press conference in Islamabad, PPP Senator SaleemMandviwala said consultation had begun with other opposition parties for the protest, which would kick off from Islamabad.

PPP Chairman Bilawal Bhutto-Zardari, in a tweet, reiterated his party’s stance on the subject.

“The PTI has brought a tsunami of inflation in the country by bringing [prices of] petroleum products to the highest level in the history of the country,” he said.

Bilawal said the government was actually “collecting the cost of its incompetence” from the people by raising petrol price by more than Rs10 per litre. He also compared the current government’s response to the increase in international prices of petroleum products with that of what, he said, the PPP had done back when they were in power.

“Only a people-friendly government of the PPP can save the country from the tsunami of inflation,” he said. Pak Sarzameen Party (PSP) Chairman Syed Mustafa Kamal also criticised the federal government for raising the price of petroleum products, which he said was akin to forcing the common man up against the wall.