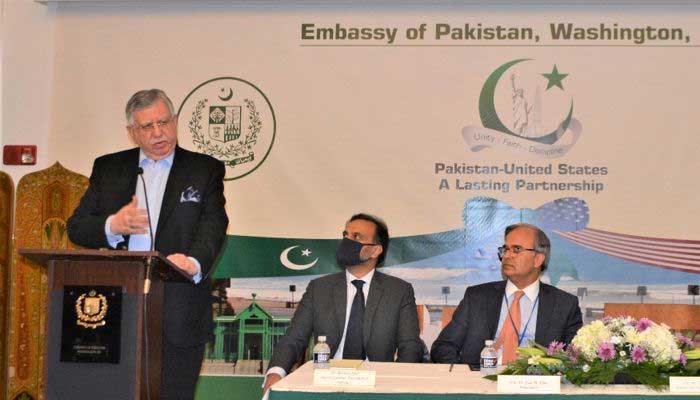 On Saturday, Finance Minister Shaukat Tarin Saturday said that the IMF will validate data and statistics on power, gas tariffs and tax collection.

The minister was addressing a seminar at the Embassy of Pakistan in Washington. He shared details of his meeting with the IMF director.

“We are here to finalise our matters with the IMF,” he said. “We have told the IMF to validate the data we have shared with them.”

The minister said that Pakistan has reached an agreement with Independent Power Producers (IPPs). We will also announce its details in a couple of days.

Tarin said the government had achieved its growth targets in various sectors. He added that it had provided relevant details to the IMF. Tarin said his meeting with IMF Director Kristalina Georgieva was a cordial and “very positive” one.

Pakistan doing its utmost to bring about economic reforms: Tarin

Tarin said he held meetings with the president of the World Bank, the US-Pakistan Business Council. And also attended a meeting at the US Institute of Peace.

“We held meetings on Afghanistan,” he said. “I met my Turkish counterpart and discussed bilateral cooperation in the agriculture, construction and tourism sectors with him,” he added.

The finance minister also said Pakistan will provide targeted subsidies to 40% of the population. He added that the government has compiled a database according to which it knows the income of each household.

“We will provide subsidies on wheat, sugar and pulses,” he said.

Tarin said the government had kept a market-based exchange rate.

The finance minister, whose tenure ends today, revealed that he would be elected as senator from Khyber Pakhtunkhwa. He said he has been appointed as an adviser.

The government has been unable to elect Shaukat Tarin as a Member of the Parliament within the stipulated time-frame of six months. Six months are also going to expire today (Saturday). Now there is no other option but to appoint Tarin as Adviser to Prime Minister on Finance and Revenue.