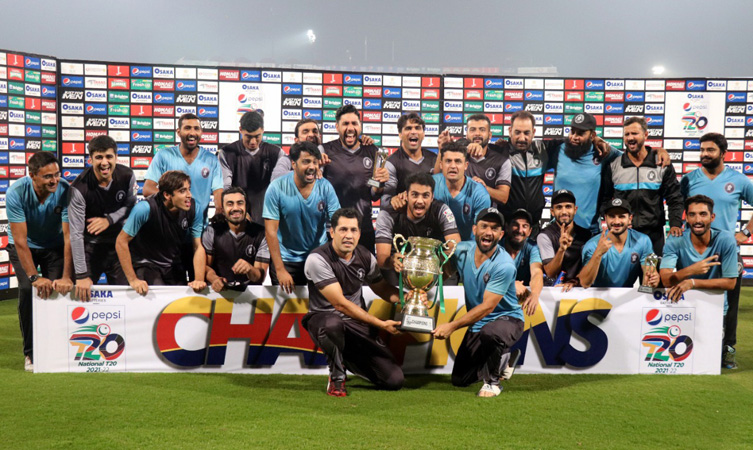 LAHORE: Khyber Pakhtunkhwa outplayed Central Punjab by seven wickets to defend their title of the National Twenty20 Cup at the picturesque Gaddafi Stadium here on Wednesday night. Chasing a modest victory target of 149, Khyber Pakhtunkhwa raced home for the loss of three scalps, thanks to Iftikhar Ahmed’s blistering innings of 45 off 19 that made light work of the chase. The 31-year-old spanked six fours and two sixes in his onslaught as Khyber Pakhtunkhwa overhauled the target with 18 balls spare. He won the player of the final as well as best player of the tournament awards. Sahibzada Farhan (26) and Kamran Ghulam’s (37) well-crafted knocks kept the asking rate in check and then Iftikhar showed the virtue of courage and bravery, totally taking the final match pressure out of the equation and just didn’t allow Central Punjab to stage a comeback in the game. Adil Amin with an unbeaten 25 off 21 provided Iftikhar support from the other end.

Earlier, Central Punjab could muster only 148 in 19.2 overs. Their main scorers were Ahmed Shehzad (44) and Kamran Akmal (42). Iftikhar also shone with the ball and claimed three wickets for five runs. Arshad Iqbal 2 for 28 and Mohammad Imran 3 for 26 were the other wicket getters. That Khyber Pakhtunkhwa bowlers had something to bowl at was due to the 85-run second wicket alliance between Ahmed and Kamran. The pair came together after Mohammad Akhlaq was caught behind off Imran Khan Snr on the second ball and put the Khyber Pakhtunkhwa bowlers on the backfoot. Ahmed top scored in the innings with 36-ball 44 while Kamran smashed three fours and two sixes in his 29-ball 42. After departure of the duo, Central Punjab’s problems compounded as Iftikhar introduced himself into the attack. Ahmed fell six runs short of what would have been his 40th T20 half-century as he hold out to long-off. In his next over, Iftikhar accounted for Saif Badar and Hussain Talat as Central Punjab slipped from 85 for one to 101 for five and the Khyber Pakhtunkhwa captain finished with a superb three for five. Qasim Akram was the only batter in the middle-order to make a valuable contribution with 11-ball 20. He struck two sixes to Imran in the 17th over, which added 20.