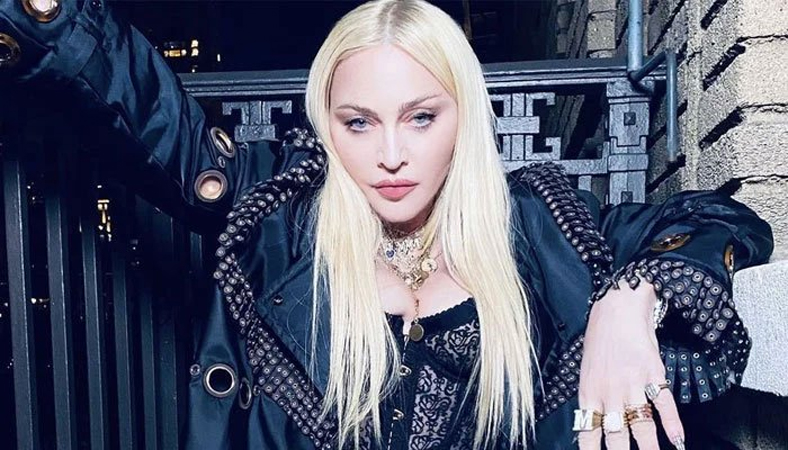 If Madonna wanted to disturb the peace during her Tonight Show appearance, well, mission accomplished.

The pop icon sat down for what may now be considered one of Jimmy Fallon’s most memorable interviews. During her appearance, which aired on Oct. 7, the performer explained that novelist and activist James Baldwin was a source of inspiration for her Madame X show, out now as a concert film. “One of the things I quote over and over again in the show is that ‘Artists are here to disturb the peace,'” she told the late-night host. “I hope that I have disturbed not only your peace this afternoon, but people’s peace while they watch the show-but I mean that in the best way.”

Or, as Fallon put it, “You get in good trouble.” Almost like a light bulb brightening, the comment spurred Madonna to suddenly get up and lay across Fallon’s desk, pushing anything in her path away. The move sent Fallon into a visible panic. While it’s unclear if this was all planned or impromptu, it made for quite the moment as he took off his suit jacket and attempted to cover her behind with it.

‘No one’s gonna see anything, my God!’ Madonna quipped on the way back to her seat. Except that she lifted her skirt and faced the audience as she did it in one swift, not-so-coy move

“No one’s gonna see anything, my God!” Madonna quipped on the way back to her seat. Except that she lifted her skirt and faced the audience as she did it in one swift, not-so-coy move.

“Life is not just about interviewing kiddies,” the 63-year-old star told Fallon. “Don’t you want to talk to an adult?” While it was certainly a standout, it wasn’t the only memorable moment during Madonna’s appearance. At other points during their chat, she asked Fallon if he’s been to a therapist, revealed she likes opiates and led a quick sing-a-long of “Like a Virgin” with the audience. After she took his cue card out of his hand, Fallon playfully urged her to “just stop.”

Kidding aside, Fallon professed his adoration for the legendary performer. “I really do mean this-I love you and I’m honored to have you here…You’re one in a million.”