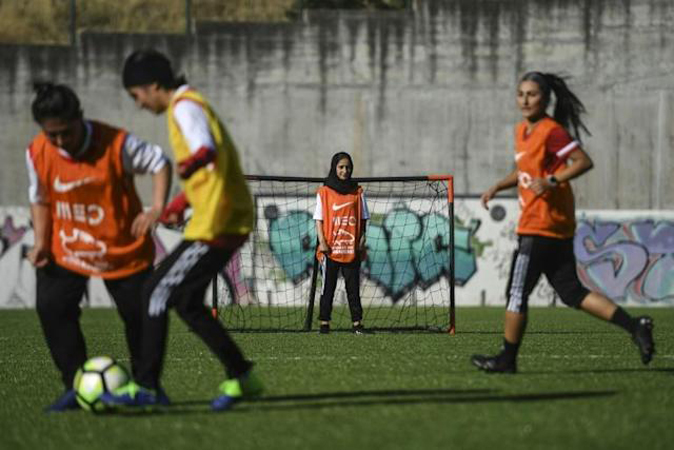 LISBON: Forced to flee Afghanistan by the Taliban takeover, members of the Afghan women’s youth football team and their families have sought refuge in Portugal and are back training in the Lisbon suburbs. The relief at having found a safe haven after arriving on September 19 shows in their faces as well as joy at being in a country whose most famous son these days is a footballer. “I can’t believe it. I’m so happy I can play football again,” Omul Banin Ramzi tells AFP after their first training session in six months. “In Afghanistan it was so bad. I’m happy in Portugal because Cristiano Ronaldo is from here,” she adds with a broad smile as her father looks on proudly.

Ramzi, sporting a red shirt topped off with a black bandana round her head, added that she would love to meet the five-time Ballon D’Or winning, Manchester United superstar. She and her team-mates are being housed temporarily in hotels in the Lisbon suburbs after finally fleeing Afghanistan following several failed attempts since mid-August. Their salvation came thanks to “a joint operation between the American and Portuguese authorities,” the Portuguese government said.

Ramzi and her team-mates were determined to leave because the Taliban oppose women playing a prominent role in public life. Since their return to power on August 15, they have said that women can play football but only under strict conditions ––– namely barred from playing in public.

‘Lot of work to do’: Nevertheless, members of the senior squad ––– many of whom flew to Australia in late August ––– were threatened by hardline Islamists and others beaten by the Taliban. The Islamists banned women from sporting activity or even going to a match when they last ruled Afghanistan from 1996 to the 2001 US-led invasion that followed the September 11, 2001 Al-Qaeda attacks on the United States. Since the first women’s Afghan teams started emerging about 15 years ago, football has grown rapidly in the country.

Khalida Popal, Denmark-based former national captain and now manager of the national squad, said in August that there were “around 3,000 to 4,000 women and girls who were registered in the football federation at different levels.” But it all disappeared overnight when Kabul fell to the Taliban. Ramzi and her team-mates and families left Afghanistan with little in the way of personal items but their lack of kit has been resolved due to captain Farkhunda Muhtaj. The 23-year-old travelled from Canada with the essential items and delivered them on the eve of their training session on Thursday. She will stay on to put them through their paces and prepare them for their friendly match with Benfica’s women’s team on Saturday.