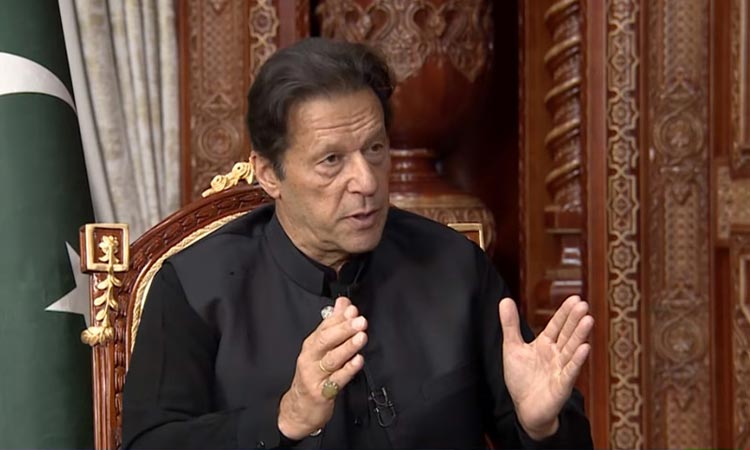 Prime Minister Imran Khan Saturday said that he has initiated dialogue with Taliban for an inclusive government in Afghanistan to include Tajiks, Hazaras and Uzbek ethnicities.

The prime minister, who paid a two-day visit to Tajikistan mainly to attend the SCO Summit, met with the leadership of Afghanistan’s neighboring countries and including Iran, Kazakhstan, Uzbekistan and Tajikistan. “After meetings in Dushanbe with leaders of Afghanistan’s neighbours & especially a lengthy discussion with Tajikistan’s President Emomali Rahmon, I have initiated a dialogue with the Taliban for an inclusive Afghan government to include Tajiks, Hazaras & Uzbeks,” the prime minister said on Twitter. He said after 40 years of conflict, this inclusivity would ensure peace and a stable Afghanistan, which was in the interest not only of Afghanistan but the region as well.

Meanwhile, Prime Minister Imran Khan said he believes that US President Joe Biden was targeted with “unfair criticism” over troop withdrawal from Afghanistan, terming his decision to pull out troops ‘the most sensible thing to do’.

In an interview with Russian broadcaster RT, the premier referred to former Afghan president Ashraf Ghani fleeing the country and the army surrendering a week before departure of foreign forces. “How can you prepare for that?” he asked. “So there was so much unfair criticism of President Biden, and what he did was the most sensible thing to do,” he said while commending the US president for his decision.

When asked about the kind of relationship he had with Biden, Imran said his government had ties with the US. “Our security chiefs keep exchanging views about Afghanistan,” he added.

The prime minister also said he is not sure whether the US has any coherent policy on what they are going to do in the war-ravaged country. He also called upon the United States to devise a strategy if a humanitarian crisis broke out triggered by a feared halt in international help to Afghanistan. “There will be far-reaching consequences in terms of the refugee problem, which Pakistan and Iran will feel more as they have taken more number of refugees,” he cautioned.

The premier stressed the US had a big role to play, as it was there [in Afghanistan] for 20 years. The only reason the US invaded Afghanistan, he said, was terrorism. “What would be the achievement if Afghan soil becomes a place for terrorists again. We should not let Afghanistan drift towards another crisis,” emphasised the PM.

The premier said he was deeply hurt by the remarks of US senators against Pakistan over the Afghan debacle. “Pakistan is the country that gave the greatest number of sacrifices for the US in its war,” he said. “We were asked to become part of this coalition when Pakistan had nothing to do with 9/11 as there wasn’t any Pakistani involved. We had no reason to enter the war.” He said it was painful to see the US making Pakistan a scapegoat for its failures.

Imran Khan also dispelled the impression that Pakistan allegedly helped the Taliban in the fight against US forces. “If we believe this is the case, it means Pakistan is stronger than the US and the whole of the Europeans.” He said it was all propaganda by the ‘puppet’ Afghan government led by Ashraf Ghani to cover up its ‘incompetence, corruption and inability’ to govern the country.

He called out India for sponsoring propaganda to defame Pakistan, saying Delhi had heavily invested in Afghanistan for its nefarious designs. He underlined that Pakistan was working with all neighbours of Afghanistan on a mechanism to recognise the Taliban government. He stressed upon the new Afghan rulers to form an inclusive government, which he said was a key to long-term stability in the country. “There are people within the Taliban who feel the government will remain unstable unless they get all other minorities under the umbrella,” he added.

PM Imran noted that the Taliban were a reality now and the world didn’t have a choice except to incentivise them for a stable country. “The international community must encourage them to walk this path and hopefully it will lead to peace.” He warned that Afghanistan will collapse if the world put sanctions on it. “Around 75 per cent of the country’s budget is through aid, and if this monetary assistance is stopped, the country will fall.”