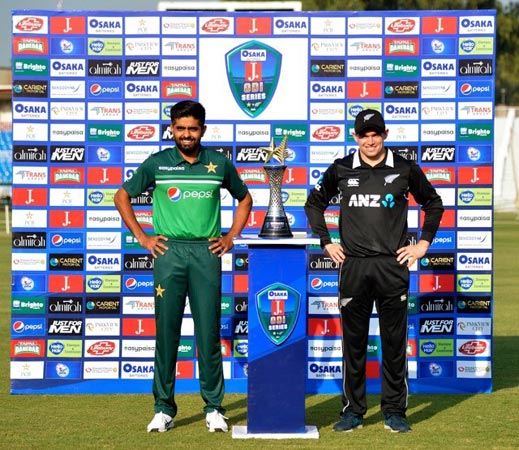 LAHORE: Skipper Babar Azam and his charges are aiming to overwhelm visiting New Zealand to make an immediate impact when their home three-match one-day international series, after 18 years, begins with first contest at Rawalpindi Stadium here on Friday (today). International cricket in Pakistan was suspended in the aftermath of terror attacks on the Sri Lankan side in 2009, but has been slowly revived over the past two years. The Sri Lankan cricket team were the first to return to Pakistan in 2019, while South Africa visited for a tour in January after a 14 year gap. New Zealand arrived in two batches on last Saturday and Sunday, welcomed with a level of security usually reserved for visiting heads of state that included armed guards escorting their bulletproof buses. The Black Caps squad, who are returning for the first time since 2003, are staying in an Islamabad hotel guarded by a heavy paramilitary and a police contingent. They have come from Bangladesh, where they were beaten 2-3 in the Twenty20 international series. Pakistan and New Zealand will also play five Twenty20 internationals — all in Lahore.

Top-ranked New Zealand are without many of their top players — who are instead heading to the United Arab Emirates for the Indian Premier League — including captain and leading batsman Kane Williamson, and pace bowling trio Trent Boult, Tim Southee and Kyle Jamieson. These two sides last clashed in a bilateral ODI series in 2018 in United Arab Emirates. New Zealand sealed a 47-run victory in the series opener in Abu Dhabi. Pakistan then hit back with a six-wicket win at the same venue. The series ended 1-1 after the final ODI in Dubai was abandoned due to rain. This ODI series provides an opportunity to sixth-ranked Pakistan to climb a spot in the ICC Rankings. If the hosts beat the tourists by a 3-0 scoreline, they will jump to fifth position, however, any other result will see both sides retain their pre-series rankings.

Despite absence of top star players from the visiting team, Pakistan captain Babar is not taking his opponents lightly. “It would have been nicer had their best team come,” said Babar, who scored a brilliant hundred in the last ODI between the two teams in the 2019 World Cup at Edgbaston. “But whatever the composition of their team we will play to our best and win the series.” He added finally the day had arrived and his entire camp was very excited to play New Zealand at home. “We have practiced hard for this series and I am sure we will take full advantage of our home conditions. We have a balanced squad and I remain optimistic about our chances in what promises to be an exciting series. I am sure fans at the stadium and millions watching us on screens will enjoy these matches.” New Zealand have won 12 of their last 15 ODIs against Pakistan.

Former Test captain Ramiz Raja, who has recently been appointed Pakistan Cricket Board (PCB) Chairman, has vowed to transform the sixth-ranked ODI team after a shake-up in the team’s backroom staff. His elevation came just a week after head coach Misbahul Haq and bowling coach Waqar Younis stepped down for personal reasons. Former off-spinner Saqlain Mushtaq replaced Misbah while former all-rounder Abdul Razzaq was appointed his assistant. Ramiz also announced that Australian great Matthew Hayden and South African Vernon Philander have been recruited as batting and bowling coaching consultants ahead of the Twenty20 World Cup next month.

Tom Blundell ruled out of Pakistan ODIs: Conditions in Pakistan will be a new challenge for New Zealand, who last toured Pakistan 18 years ago. Pakistan did host series against the Black Caps in the UAE in 2009, 2014 and 2018 but improved security has gradually seen the country over the past six years be able to welcome international teams to their country again. The inexperienced New Zealand squad failed to clinch a T20I series victory in Bangladesh but are hoping that their trials and tribulations there will hold them in good stead for the tour in Pakistan. Tom Latham’s side were dealt a further blow on the eve of the match, with Tom Blundell being ruled out of the series with a quad strain. Daryl Mitchell has been drafted in as his replacement. Mitchell was originally set to join the team for T20I leg of the Pakistan tour Mitchell had made his ODI debut against Bangladesh earlier this year, and scored an unbeaten 100 in the third game of that series, in Wellington.

“Tom’s been working hard since the injury in Bangladesh,” Nishil Shah, the New Zealand physio, said. “The injury’s not quite where we want it so we think it’s best for him to concentrate on his rehab given the big summer of cricket ahead.” Stand-in skipper Latham said: “It’s obviously very pleasing for Pakistan as a nation to have international cricket back. They’ve had a couple of series in recent times and obviously this is another one. So, for us, it’s just about trying to adapt to conditions like we did in Bangladesh and see what we get. So, another opportunity for the group and they’re all looking forward to it.” New Zealand’s coach Glenn Pocknall said his team were ready to have a crack at Pakistan, insisting the heavy security surrounding the players would not be a distraction. “I think we are now used to the security in some way, coming from Bangladesh where we had convoys for two weeks. So it’s just an extension to what we had over there,” said Pocknall, standing for the rested regular coach Gary Stead. “The players are really excited to be here, it’s been a long time coming so they are all grateful to have this opportunity… and to have a crack at this very good Pakistan team,” he said.

Vaccinated to be allowed in stadium: Crowds of fully vaccinated spectators up to 25 percent capacity will be allowed in Rawalpindi for the ODIs and T20s in Lahore. The series will not count towards the ICC World Cup Super League, which will decide qualification for the 2023 50-over World Cup, because there is no umpire decision review system in operation. The second and third ODIs will be played in Rawalpindi on Sunday and Tuesday. The series will not be part of the ICC World Cup Super League as both the PCB and New Zealand Cricket have mutually agreed to swap the status of this series with the one taking place in the 2022-23 season. This means the ODI series in the 2022-23 season will count towards the World Cup 2023 qualification while the series commencing on Friday will be a bilateral fixture in which team and player ranking points will be up for grabs.