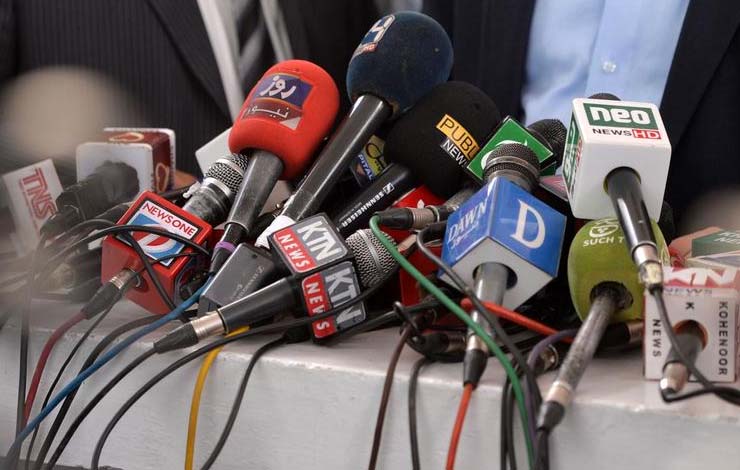 ISLAMABAD: On Wednesday, Media representatives showed their opposition to the Pakistan Media Development Authority (PMDA), as the proposed body and government came under sharp criticism during a meeting of the National Assembly’s sub-committee on information and broadcasting.

The meeting was organised with PML-N leader Marriyum Aurangzeb, while representatives from the Pakistan Broadcasters Association (PBA) and Council of Pakistan Newspaper Editors (CPNE), Minister of State for Information and Broadcasting Farrukh Habib, PPP leader Nafisa Shah, and others were present.

However, the PBA representative discussed in the meeting that it was hard not to doubt the government’s intentions when it came to the new media regulatory authority, as Information Minister Fawad Chaudhry had said channels would work towards demining the country.

The PBA representative, citing a Supreme Court decision, said the highest judiciary had ordered to deregulate media and asked the Pakistan Media Regulatory Authority (PEMRA) to work independently. “We have evidence which proves that [the government officials] said that advertisements to [the media organisations], which do not accept the bill, will be stopped,” the representative added.

The representative said there is always space to make regulations better, adding that the media representatives were ready to suggest changes in the PEMRA laws and Prevention of Electronic Crimes Act (PECA). “I had filed 4,000 complaints under the PECA law; the authorities took notice of only a few of them,” the representative said.

Furthermore, the PBA representative told the committee that the government was trying to create a divide within the media organisations. “There is a need to update the existing regulatory framework instead of bringing all media regulatory authorities under one umbrella, it is imperative that existing laws be updated,” the representative said.

“You will doubt our intentions and later say that you were trying to curb fake news,” the representative said, indicating that the government would try to gag the press through the new body. Meanwhile, speaking during the session, CPNE’s representative said it seems that the government was in confusion regarding the bill, as it inquired why the regime was in such a hurry to get it approved.

“We will never accept this PMDA; the current regulatory frameworks should be made better. Instead of bringing all authorities under one umbrella, the existing laws should be improved.” The representative of CPNE said that the government should explain and give the legal definition of fake news.

While sharing the view in meeting PPP leader Nafisa Shah added that, she had said Information Minister Fawad Chaudhry and other government representatives speak on the matter and they were “not clear” in this regard.

The PPP leader said if the government wanted to control fake news then they could do so through the existing PECA laws. “We cannot even debate clearly on this as there is no draft of the proposed law. What will the government argue about when it has no clear direction.”

The state minister said the government was trying to bring Facebook into the tax net, which would generate huge revenue. “Digital media should be regulated.” “It was fake news that the government was going to enact an ordinance or it was going to table a bill,” the state minister said,  adding that the final draft was not ready and it would be completed after negotiation.

Aurangzeb, in response, said that there was confusion regarding the proposed bill as the government continues that there is no draft of PMDA to date. The PML-N told the committee that the government has said that it would not accept the law as an ordinance, rather it would introduce it through the parliament.

Aurangzeb said: “The meeting has proposed that the existing media laws be updated and the safety laws of media workers be approved in Parliament at the earliest.” “Some media houses have completely rejected it and some have proposed updating the law. The committee has sought written recommendations from stakeholders till September 21.”

It was decided that another meeting will be organised next week where the committee would be briefed on the legal definition of fake news. Speaking to journalists after the meeting ended, Aurangzeb said media organisations had shown their concerns on the proposed PMDA. “The law of media workers’ security would be passed in the human rights committee and then the Parliament.”

Habib told journalists after the meeting ended,that the government had shared the presentation on PMDA with all the stakeholders. “All the stakeholders are aware that the existing laws need to be updated. The only difference the government and media organisations have is regarding the absence of a mechanism,” he said. While a journalist asked about the definition of fake news, he said: “A news not based on facts is fake news.”