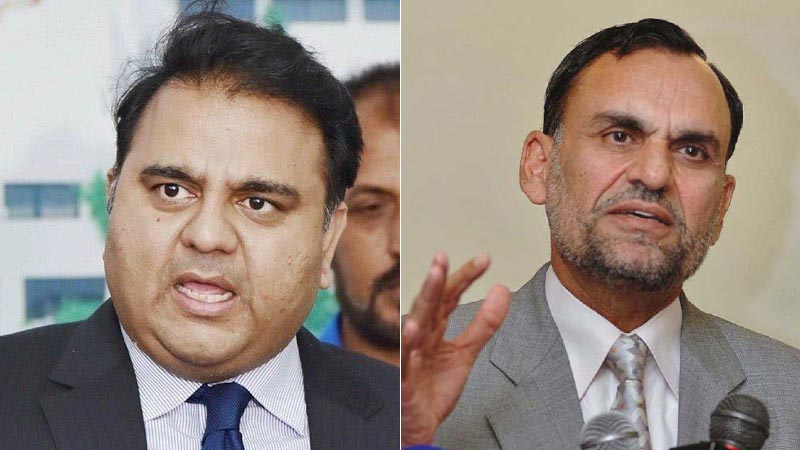 ECP members Nisar Durrani, Shah Muhammad Jatoi, and other officials of the commission attended the meeting. The members condemned the allegations ‘in the strongest possible terms’ and rejected them.

According to a news release, the ECP’s meeting, chaired by Chief Election Commissioner (CEC) Sikandar Sultan Raja, decided to seek proofs from Swati as he had accused the ECP of taking bribe and being on the payroll of someone during a meeting of the Senate Standing Committee for Parliamentary Affairs and another held the night prior at the President House.

The ECP also decided to seek evidence from Fawad Chaudhry in relation to allegations he had levelled during a press conference. The meeting decided to issue legal notices to both the ministers.

The ECP has also sought records of the Presidential House and Senate Standing Committee meetings and Chaudhry’s press conference from the Pakistan Electronic Media Regulatory Authority.

Last Friday, the ECP officials had walked out of a meeting of the Senate Standing Committee on Parliamentary Affairs after Swati accused the commission of taking money from companies that make electronic voting machines.

Later on the day, Information and Broadcasting Minister Fawad Chaudhry said during a press conference that it seems the ECP has “become the headquarters for Opposition parties” and the chief election commissioner is “acting as their mouthpiece”.

Fawad had said the government had no objection if the CEC had any personal sympathy with Nawaz Sharif as obviously he had remained in close contact with the former prime minister in past, but, he added, let it be clear that whether it was the ECC or any institution, it would have to follow the acts passed by Parliament.

“Nobody would be allowed to undermine the Parliament’s supremacy,” he had said, adding that if ECP had any objection on use of technology and any improvement in system they should share with the government.

He had also asked the CEC to present himself as a head of the state institution instead of issuing directions instructions to different organizations with regard to the EVMs.

“The CEC should forthwith stop politicking while being head of the ECP,” he said, adding if he had interest in politics then he should leave the post and contest election for entering into political arena.