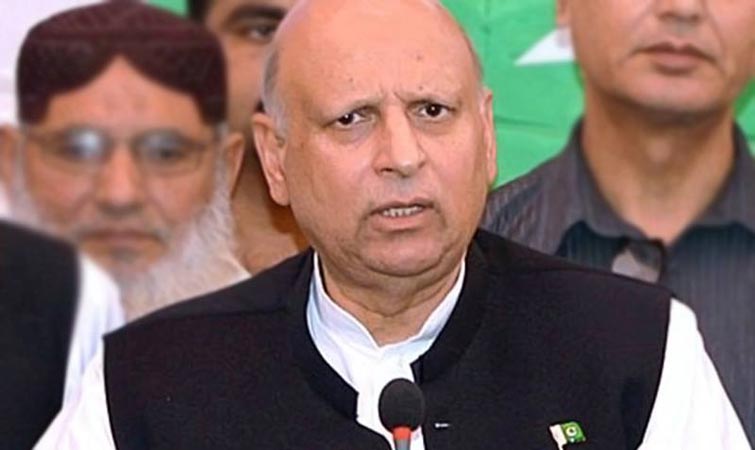 Punjab Governor Chaudhary Sarwar has said that cooperation for Afghan peace process will not only benefit Afghanistan but it will also be in larger interest of region and global community as well. Pakistan will not interfere in internal matters of any country including Afghanistan but conspiracies of India against peace are seen by whole world.

Addressing the media with Haleem Adil Sheikh on Sunday, he said that unfortunately India was still against peace and there was no such example in world of the way in which India is oppressing innocents and children in Kashmir. United Nations should solve the issue of Kashmir in accordance with its resolutions because it is very important for complete peace in region.

Responding to a political question, Chaudhary Sarwar said that Chief Minister Punjab Sardar Usman Buzdar have full confidence of Prime Minister Imran Khan, party, coalition parties and of members Punjab assembly. There is no such example in the past of steps taken by current government in education, health and others sectors. People of Punjab are getting health cards, Sindh government should also focus on providing the basic facilities to the public as the condition of Sindh is in front of everyone.

To another question regarding electoral reforms, the Governor Punjab said that government was inviting opposition from the first day to talk on electoral reforms but unfortunately opposition is refusing the negotiations even without seeing the document of electoral reforms. Opposition parties have also not seen the electronic voting machine and they are criticizing against it. I think that instead of this non democratic behaviour opposition should talk with government on electoral reforms, elections can be made transparent only through electoral reforms, he added. Governor Punjab said that under the leadership of Prime Minister Imran Khan the complete focus of government is on strengthening the economy and National permanence. We saved the country from economic bankruptcy and today the whole world is acknowledging the economic progress of Pakistan. The government is using all the resources to overcome the problems of unemployment and inflation. Promises made with the public will be fulfilled and we will save the country from problems like poverty, and unemployment.

Opposition Leader in Sindh Assembly Haleem Adil Sheikh said that country’s progress is the main priority under the leadership of Prime Minister Imran Khan. Our government is taking all the practical steps to strengthen Pakistan. In the next elections, the decision of people will be in favour of Pakistan Tehreek e Insaaf, he added.