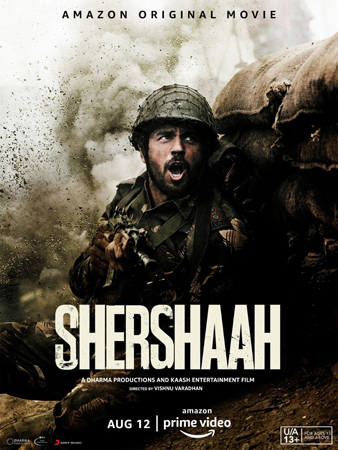 Anti-Pakistan war drama ‘Shershaah’ based on the Kargil war and Captain Vikram Batra has become the most-watched movie on Amazon Prime Video in India to date.

Interestingly, the recently-released biopic based on the life of Captain Vikram Batra is also the most popular Hindi film on IMDb with a rating of 8.9.

Shershaah is jointly produced by Dharma Productions and Kaash Entertainment. It is directed by Vishnu Varadhan.

“We have always believed in content being paramount and seeing Shershaah’s resounding success further strengthens what we, as a service, have set out to do. It was important for us to bring the inspiring story of brave heart Captain Vikram Batra and the Indian army during the Kargil war to audiences far and wide. The movie is a tribute to these sons and daughters of the soil for whom nothing matters more than the love for the country. Shershaah is a very special film and we are absolutely delighted to see it receive such an unprecedented amount of love and success from all corners”, said Vijay Subramaniam, Director and Head, Content, Amazon Prime Video, India said.

The film features Sidharth Malhotra and Kiara Advani in lead roles with Shiv Panditt, Raj Arjun, Pranay Pachauri, Himanshu Ashok Malhotra, Nikitin Dheer, Anil Charanjeett, Sahil Vaid, Shataf Figar and Pawan Chopra playing pivotal parts. “Shershaah has always been a film close to our hearts, and seeing the love and appreciation the film has received makes me feel incredibly proud about the movie and each and everyone associated with it. PVC awardee Captain Vikram Batra’s story is one that no Indian shall ever forget, that said, what we intended to do was to tell the story of what made him the brave heart he was, to look deeper into his life, his passion and his love for the country and Dimple. It fills me with pride to see the love,” said producer Karan Johar.