Pakistan, Iraq express concerns over escalation of violence in Afghanistan 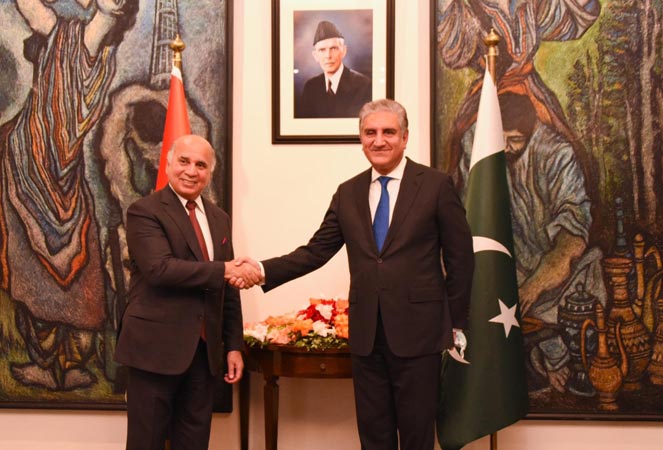 The foreign ministers of Iraq and Pakistan on Wednesday expressed concerns over the escalation of violence in Afghanistan and said dialogue was the only way forward to resolve the situation in the war-torn country.

“We are worried about the situation in Afghanistan because we see signals of using violence to solve the problem,” Iraqi Foreign Minister Fuad Hussein, who is on a two-day visit to Pakistan, said speaking to reporters in Islamabad. “The peace process and meetings are continuing and we hope that the solution will be through the peace process and negotiation between and among various political parties in Afghanistan,” he further said. “In the end, Afghanistan needs peace but violence there affects everyone,” he said, adding that the country is not “far away from Iraq.”

Foreign Minister Shah Mahmood Qureshi said he updated his Iraqi counterpart on India’s continuous state-terrorism against innocent Kashmiris in the occupied valley. He said Pakistan had been consistently advocating the peace process, may it the Doha talks, the Heart of Asia Istanbul process or the discussion of Troika. Pakistan never supported any ‘apolitical’ group in Afghanistan, he added.

On the recent social media trend ‘#SanctionPakistan’, he said it was a “spot controlled trend and a part of the smear campaign to divert attention from the internal challenges Afghanistan was going through”. “Despite criticism, Pakistan will continue to facilitate the Afghan process,” he said, adding that details revealed that it was an “orchestrated and not a natural social media trend”.

Qureshi said Pakistan was clear in its approach towards Afghanistan and “would not be apologetic”. “We have done whatever we could and will continue to do. It is in-sync with the agenda of our government,” he said.

Iraqi FM Fuad Hussain said tension among the regional countries directly affected Iraq and added that his government was planning to hold a meeting of regional leaders this month. He announced that Iraqi prime minister had accepted the invitation of the government of Pakistan to visit the country in near future.

Dr Fuad Hussein assured Pakistan of introducing a new visa policy for Pakistani pilgrims aimed at facilitating their visits to the holy sites in Iraq. He said every possible facilitation would be extended to Pakistanis visiting holy places in Karbala and Najaf.

Dr Fuad Hussein said he would discuss with the Iraqi interior minister to “make it easier for Pakistani pilgrims visiting Iraq”, adding that promoting people-to-people level contacts was in the interest of both countries. Foreign Minister Qureshi mentioned that the issue of smooth issuance of visas for Pakistani pilgrims to Iraq, especially during Muharram, was taken up. On the personal interest of Prime Minister Imran Khan, he said, a pilgrims management policy was under consideration. Also, plans are underway to set up a Pakistan House at Karbala and a medical centre to facilitate the pilgrims.

FM Qureshi mentioned the “goodwill and warmth” existing between the governments and people of Pakistan and Iraq, however pointed out that lack of bilateral engagement needed more collaboration. He said both sides agreed to convene the ninth meeting of the Pak-Iraq Joint Ministerial Commission.

On the Memorandum of Understanding signed between the two foreign ministers, he said the accord on Bilateral Political Consultation would enhance the existing friendly relations between Pakistan and Iraq and give a new dimension to cooperation in diverse areas.

Pakistan and Iraq also inked Memoranda of Understanding (MoU) on holding bilateral political consultations. The foreign ministers of Pakistan and Iraq inked the MoU on bilateral political consultations. Foreign Minister Shah Mahmood Qureshi and his Iraqi counterpart Dr. Fuad Hussain inked the document at the signing ceremony held here at the Ministry of Foreign Affairs. The MoU is expected to further enhance the existing friendly relations between Pakistan and Iraq and give a new dimension to cooperation in diverse areas.