* Bilawal says his party will form government across country after winning polls
* People have now realised that 'real face of tabdeeli is inflation, poverty and unemployment' 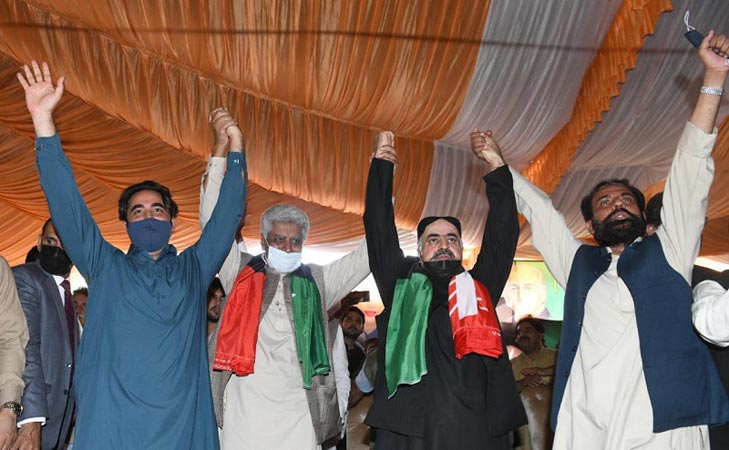 PPP Chairman Bilawal Bhutto-Zardari on Sunday claimed that the next government will be formed by his party across country after sweeping the next general elections, adding that it is only the PPP which can resolve the problems of the people.

Addressing a rally in Quetta, Bilawal expressed confidence that the PPP will form the next government all over Pakistan and that a PPP jiyala (devotee) will become the next Balochistan chief minister. “If there is any political party in the country that cares about the needs of the poor, it is the Pakistan People’s Party,” he claimed.

Bilawal also formally welcomed former PML-N leaders Nawab Sanaullah Zehri and retired Lt Gen Abdul Qadir Baloch and others to the PPP. He said the new additions would help the PPP become stronger and win the next elections. “The manner in which you have joined the party, we will give strength to each other and will work hard side-by-side and struggle,” he told the new entrants. “In the coming general elections – in the whole country but especially in Balochistan – we will establish a PPP government and elect a jiyala chief minister and find solutions to Balochistan’s problems.”

He mentioned the names of other personalities who also joined the PPP – former provincial minister Nawab Mohammad Khan Shahwani (National Party) and former minister Col (r) Younis Changizi (PML-Q) – and thanked them for doing so, saying they would become “our power”. “We will empower and support each other so that we could continue our struggles,” he said. “Together, we will find solutions to the problems being faced by the people of this province and reach out to each and every district,” he added.

Bilawal said the PPP wasn’t merely a political party but “a family, and we do politics for respect and will give respect to one another and the people of Balochistan. We will do politics together with each other in the coming days.”

Taking a jibe at the PTI-led government, Bilawal said that people have realised now that the ‘real face of tabdeeli (change) is inflation, poverty, and unemployment’.

He thanked the people of Balochistan for supporting his grandfather, Zulfikar Ali Bhutto, in the past and said that the PPP has always worked towards the welfare of the poor and the needy. “We started the Benazir Income Support Programme to pull people out of poverty,” he said, adding that with the exception of the PPP, all other political parties in the country are trying to ‘snatch the rights of the people of Balochistan’.

Speaking during the rally, Abdul Qadir Baloch, who recently joined the PPP from Balochistan, said that he decided to bid farewell to the PML-N because the party is “not prominent in Balochistan anymore”. He said that the PTI does not have any important figures in Balochistan either, therefore, he decided to join the PPP. “The PPP established its worth in the province on the basis of merit,” Baloch said, adding that if the party continues to do good work there, it will easily form a government in Balochistan.

Former PML-N member Sanaullah Zehri, who also announced that he’s joining the PPP, said that he parted ways with his former party because PML-N supremo Nawaz Sharif ‘disrespected’ PML-N members from Balochistan. “The only thing we had asked for from Punjab was respect,” he said.