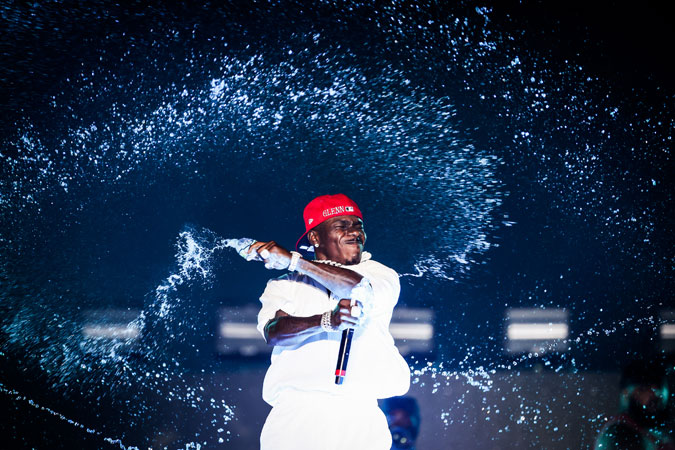 The US music festival Lollapalooza announced Sunday it had dropped DaBaby from its line-up after the rapper made homophobic comments and false statements about AIDS during a recent performance.

“Lollapalooza was founded on diversity, inclusivity, respect, and love. With that in mind, DaBaby will no longer be performing at Grant Park,” the Chicago-based festival tweeted.

DaBaby – whose real name is Jonathan Lyndale Kirk – sparked widespread backlash during a concert at the end of July, when he was accused of spreading misinformation about HIV and AIDS.

“If you didn’t show up today with HIV, AIDS, any of them sexually transmitted diseases that’ll make you die in two, three weeks, put your cell phone light up,” he told the Miami crowd, according to videos shared on social media.

He also made homophobic comments and insulting statements about women.

Major names in music including Elton John, who founded the Elton John AIDS Foundation, and Madonna, a longtime proponent of HIV/AIDS research, called out the 29-year-old for spreading misinformation and contributing to the stigma around the diseases.

“HIV misinformation and homophobia have no place in the music industry. We must break down the stigma around HIV and not spread it,” John’s foundation said in a statement shared on the musician’s Twitter. “As musicians, it’s our job to bring people together.”

Pop star Dua Lipa, who collaborated with DaBaby on her song “Levitating,” said she was “surprised and horrified” by his comments, while television star Jonathan Van Ness – who is open about his experience living with HIV – warned that the stigma around the diseases was “killing folks.” DaBaby later apologized on Instagram but was quickly slammed for saying in the video message that his gay fans didn’t have AIDS because they “got class” and were not “nasty” or “junkies.”

He then apologized again on Twitter, acknowledging what he had said was “insensitive” but adding it was unintentional. DaBaby was nominated this year for the Grammy for Record of the Year for “Rockstar,” a guitar-driven track featuring fellow rapper Roddy Ricch.

After enjoying several chart-topping months with “Rockstar,” the musician released a Black Lives Matter remix of the hit that referred to the anti-racism protests that exploded in mid-2020 following the death of George Floyd, a Black man, in police custody.

DaBaby also includes lines about his own experiences of police abuse.

He rose to mainstream prominence in 2019 after releasing his debut studio album “Baby On Baby,” which included his hit single “Suge.”