* The Italian Riviera, on the Ligurian coast, is where the Apennine mountain range seems to tumble into the sea 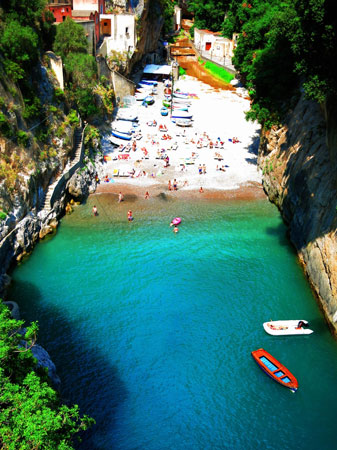 Some of the very best times you might remember spending in Italy – the fifth most visited country in the world – are probably based around its ancient towns: frivolous afternoons sitting in sun-blasted piazzas; getting lost in winding streets; searching for the ultimate cherry gelato; soaking up faded frescoes in cool, marble galleries.

But beyond these gems Italy is graced with some 5,000 miles of coastline. Ask any Italian and they will – no doubt – have a favourite beach. These are often found off the beaten track, and will be sewn into the fabric of their family traditions.

The Italian Riviera, on the Ligurian coast, is where the Apennine mountain range seems to tumble into the sea. The historic port of Genoa gives way to understated beach towns, lined with blue-and-white striped parasols and frequented by locals in search of the sun and the freshest cuttlefish spaghetti for lunch.

Move south, past the magnificent Portofino, with its super-yachts and high-end boutiques, and you’ll soon come to clusters of magical bays and hidden inlets.

One of these is San Fruttuoso, a small cove that you can reach by boat from Portofino or, if you are feeling energetic, by hiking along the hilly terrain. Once you’ve arrived, all the effort is worth it. It’s a one-of-a-kind place, where the beach is dominated by a 10th Century abbey. You can roam around inside and glimpse the glittering sea through its arched Romanesque windows.

Otherwise, the day is spent dipping into emerald-green waters or hopping on to one of the glass-bottom boats to embark on a mini-voyage to see the Christ of the Abyss statue, found submerged a few metres off the coast. Placed there in 1954 to commemorate those lost at sea, Christ’s face and arms are raised up towards the light – making for an eerie spectacle.

Once other day-trippers depart, you can actually have the bay all to yourself by renting a simple fisherman’s cottage, Casa di Mar, perched high behind the abbey and owned by the Landmark Trust. Wake up early to watch the sun rise over the Golfo Paradiso and you’ll see the rolling waves, scudded with clouds of foam, light up for miles in front of you. Price from £763 for four nights for four

Move south, past the magnificent Portofino, with its super-yachts and high-end boutiques and you’ll soon come to clusters of magical bays and hidden inlets

In Tuscany, try bypassing the area’s beloved rolling fields and medieval hillside towns, and move on to the wilder Monte Argentario peninsula in the Maremma region. A former island, it is now connected to the mainland by two strips of land – although it still feels wonderfully remote from other Tuscan tourist haunts. Here, fortresses, steep cliffs and Mount Argentario itself shield a necklace of sandy beaches.

Cala Mar Morto, a 20-minute drive along the coast from the elegant seaside town of Porto Santo Stefano, translates to mean Dead Sea and is so-called because of its placid, crystal-like waters. Dotted with rock pools, it’s perfect for snorkelling. Alternatively, hire a canoe to paddle around Isola Rossa, a giant red rock facing the beach.

For a peaceful summer retreat, book the restored farmhouse, L’Agrumento dell’Isola. Whitewashed rooms are scented with sea breezes and citrus fruits, wafting in from the lemon and orange trees outside. Follow the tree-lined path to discover your own slice of beach, from £1,439 per week for two.

When in Rome, do as the Romans do when the temperatures rise and leave the city. Spiaggia di Frontone is found on Ponza Island, a favourite holiday destination among locals. It’s an hour’s drive south-west of the city and then a ferry ride across to the main port town. The beach, on the north west of the island, is lapped by a vivid kingfisher-blue sea. From here you can hire a small boat, drop anchor in sheltered coves and swim into the Pilate’s Grottoes – a series of enchanting, underwater caves.

At lunchtime, follow the path up into the rocks and you’ll find the Associazione Culturale Cala Frontone, a casual little trattoria serving seasonal, rustic dishes such as fried courgette flowers and octopus with black pepper potatoes

With its breath-taking clifftop towns such as Positano and Ravello, the Amalfi Coast is the jewel in the crown of Italy’s coastline. But further south – and away from the crowds – is the Cilento Coast, one which the Italians have kept to themselves.

Fringed by the Cilento National Park, Capo Palinuro is a rocky headland, surrounded by deep blue grottoes and wide, sandy beaches, such as the secluded Spiaggia della Marinella. While away the hours basking in the sun on the sand, rent umbrellas and sunbeds at the lido or take off in a pedalo to find your own private cove.

When it is time to bed down for the night, head along the craggy coast – bordered by the valleys and peaks of the Dolomiti Lucane – to the village of Maratea in the rugged region of Basilicata. You’ll know you’ve arrived when you spot the Christ the Redeemer statue looking down from the top of Monte San Biagio. Check in to the atmospheric La Locanda delle Donne Monarche, carved out of an 18th Century convent, and tuck into a traditional Maccheroni di Fuoco – home-made pasta deliciously laced with chilli. From £104 per room per night.

Calabria, in the toe of Italy, is often overlooked by tourists for the more manicured destinations of Sicily or Sardinia. But the region has a faded beauty and warm-hearted authenticity loved by many Italians. Known as the Coast of the Gods, it also has a unique topography, where the Tyrrhenian and Ionian Seas merge.

With 500 miles of coastline, there are many standout beaches to be found, such as Spiaggia di Grotticelle, an arc of cotton-white sand that you reach down steps carved out of the cliff face. Overlooked by the lighthouse on Capo Vaticano and surrounded by high bluffs, the bay with its natural shelter and warm clear sea to bathe in feels blissfully cocoon-like.

You’ll soon be shaken out of your sun-kissed stupor by a visit to the buzzy seaside town of Tropea. It’s beautifully scenic – from the clifftop sanctuary of Santa Maria dell’Isola to the cobblestone-lined old town. It’s also where you’ll find the chic Villa Paola, a boutique hotel converted from a former monastery, set in its own organic Mediterranean gardens. From £180 per room per night.

Found in the heel of Italy, and extending up the eastern coast, Puglia is known for its sun-baked vistas, curious-looking trulli houses and an abundance of traditional food, such as orecchiette pasta and taralli – a mini, twisted breadstick flecked with fennel. It also has some of the best beaches on the mainland, stretching from Salento in the south to Gargano in the north.

For total seclusion, Dune di Campomarino, close to the village of Maruggio, is firmly off the tourist trail. Found on Puglia’s Salento peninsula, high sand dunes and fragrant juniper bushes give a stunning contrast to the azure Ionian Sea. As a base to explore the province, Villa Minni, a stylish, trullo-style house, is just a 15-minute drive north, and comes with its own herb garden and pool. From £2,501, for a seven-night stay for six.

On the Adriatic side, Torre Guaceto, close to Brindisi, is a protected nature reserve and remains quiet and untouched. It is surrounded by marshes and wetlands, and stretches for miles, so the only crowds you’ll face will be flocks of egrets and herons flying overhead.

Capture the bare-foot beauty of the area with a stay at Rocco Forte’s Masseria Torre Maizza, worth the 30-minute drive on towards the town of Bari. The 16th Century traditional house is surrounded by olive groves and has exquisite rooms designed by Olga Polizzi, Rocco Forte’s designer sister. Best of all, the rooftop bar is just the place for a cold Apulian Negroni. From £86 per night for two.

Further north, off the coast of Gargano, Italy’s Tremeti Islands are another untapped source of joy. Once a penal colony, the five islands now offer an intoxicating escape for travellers coming from the mainland, and you can easily sail across by ferries which leave from five different port towns. San Domino – known as The Pearl of the Adriatic – has the only sandy beach in the archipelago: Cala delle Arene.

You can trek across the whole island through aromatic pine woods in just two hours, while divers can roam the ocean’s depths to find a Roman shipwreck 75ft underwater off the beach at Cala Zio Cesare. Seafood here is sublime, and the lobster tagliatelle will be the tastiest you’ll ever have. It can be found at Ristorante Da Pio, in the main village.

Named after the area’s traditional fisherman-hut structures, which look like Thai stilt houses built over the sea, the Trabocchi Coast in Abruzzo is perhaps Italy’s most unsung destination. You can see a few of the odd-looking constructions from the quiet Spiaggia di San Nicola beach, just north of the medieval town of Vasto. The beach is one of the most unspoilt along this stretch and is found by following old coastal railway tracks from the main road.

Ancona in Le Marche is just a two-hour drive north, but, as is typical throughout Italy, the regional differences are stark. In early summer the countryside is alive with fields of nodding sunflowers while its shimmering coastline, the Riviera del Conero, can be as impressive as the Amalfi Coast.

Spiaggia del Due Sorelle is one of the area’s standout beaches, named after two rocky outposts – the ‘two sisters’ – that rise out of the sea. The beach can be reached only by boat, but the reward is crystalline waters and shade under limestone cliffs. Nearby is the pretty town of Numana.

Head to the main square and La Gelateria La Morelli, an ice-cream parlour that opened in 1927. Its window will lure you in with its pastel-hued, creamy confections such as pistachio, melon, ginger and strawberry. If you fancied working your way through the whole rainbow of flavours, the shop offers a basic B&B – making it the ideal bolthole for sweet dreamers. From £65 per night for two.