Biden hails deal to ‘transform’ US with infrastructure cash bonanza 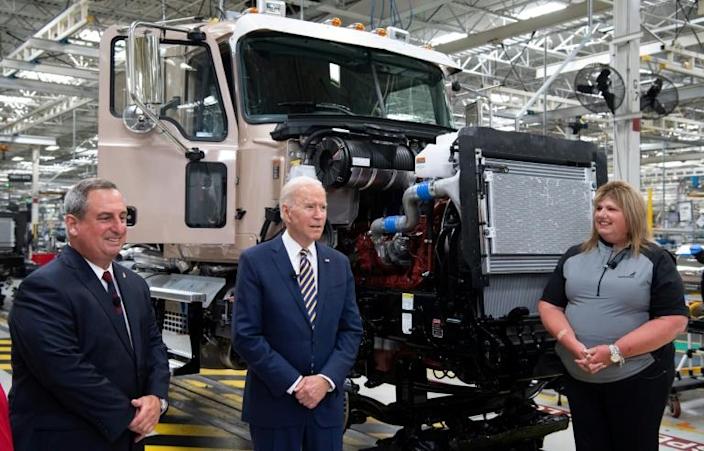 US President Joe Biden on Wednesday announced a deal with senators on a massive infrastructure package that would pump historic levels of federal funding into fixing US roads, bridges and waterways and expand clean energy programs.

The bipartisan measure, including some $550 billion in new spending, came together after two months of often-tense negotiations that Biden and his Democrats wanted to see concluded before Congress breaks for its August recess. The deal will create millions of good jobs and make the US economy more robust, sustainable, resilient and just, the White House said in a statement.

Biden called it “the most significant long-term investment in our infrastructure and competitiveness in nearly a century.” “This deal signals to the world that our democracy can function, deliver, and do big things,” he said, adding that the plan had the potential to “transform America and propel us into the future.”

The deal will make the largest-ever federal investments in public transit and drinking and waste water infrastructure; the largest funding of passenger rail since the creation of Amtrak; and the largest investment in bridges since creation of the nation’s highway system. It also helps tackle the climate crisis by investing historic amounts in clean energy projects and electric vehicle infrastructure, such as electrification of thousands of school and transit buses nationwide and forming an authority to oversee creation of a clean electricity grid. The bipartisan group negotiating the blueprint appears to have overcome a key hurdle: how to pay for the huge spending outlay. The White House said revenue would come from redirecting unspent Covid emergency relief funds, boosting corporate fees and strengthening tax enforcement on cryptocurrencies. Senate Majority Leader Chuck Schumer said there would be a preliminary vote as early as Wednesday night to begin debate on the bill. “I believe we have the votes,” he told reporters on Capitol Hill.

The deal needs the support of at least 10 Republicans for the required 60 votes in the 50-50 Senate. “I’ll be voting to begin debate on the bipartisan infrastructure package,” Republican Senator Kevin Cramer tweeted. “While I can’t say I’ll vote for final passage, we need to keep this proposal moving forward and work to amend it if necessary. The bill would still need to clear the House of Representatives, where it could face resistance from progressive Democrats. Some have warned they would not sign on unless Biden’s ambitious $3.5 trillion budget package — including once-in-a-generation spending on health care, education, social welfare and climate action — also passes the Senate.

The bipartisan agreement was announced shortly after Biden traveled to the Pennsylvania factory of an iconic truckmaker where he called on Congress to pass tougher “Buy American” policies that would boost the US-made content in $600 billion in government purchases.

Biden said his administration was proposing legislation to update the 1933 Buy American Act to close loopholes and pressure businesses that provide items to the government to add more US-made inputs to their supply chains. The effort is aimed at growing US-based companies, creating more union jobs, strengthening American manufacturing and securing domestic supply chains as a way to better compete against a surging China. “I can sum it up in two words: ‘Buy American,'” Biden told about 130 employees and others at the Mack Trucks Lehigh Valley Operations Manufacturing Facility.

Biden’s plan comes as the Covid-19 pandemic has highlighted weaknesses in global supply chains that have left US markets short of critical products and materials, including semiconductors, building materials and toilet paper. The administration is proposing to increase the 55 percent US-content requirement in the Buy American Act for supplies to the federal government to 60 percent in the short term and gradually to 75 percent.