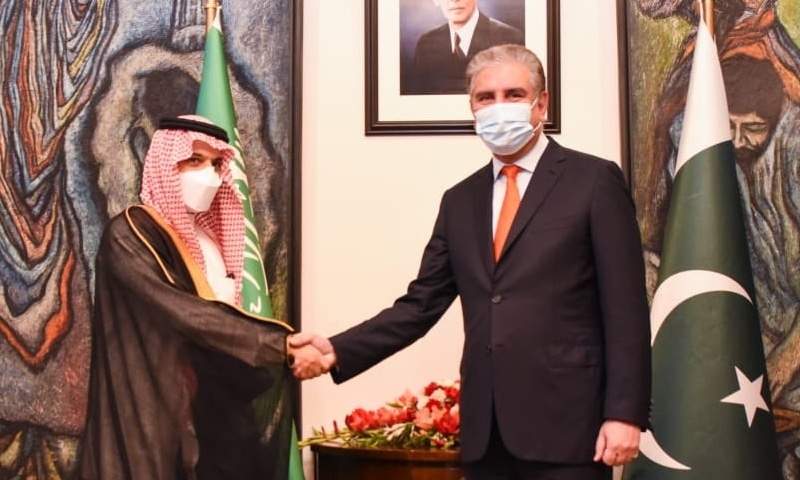 ISLAMABAD: The Saudi foreign minister Prince Faisal Bin Farhan Al Saud in his visit to Pakistan stressed the need to further bilateral ties between Saudi Arabia and Pakistan that have spread out over decades.

In the visit that is his second one to Pakistan, the Saudi prince and FM said in a joint presser with his counterpart Shah Mehmood Qureshi said that the purpose of calling on him was to mark a follow up on Prime Minister Imran Khan’s latest visit to the Kingdom.

Acknowledging the immense greetings bestowed on him, the prince said he was grateful for the country and said the bilateral ties will now flourish on the institutional levels.

He affirmed that Pakistan which houses over 2.5 million Pakistani expatriates, has immunized against Covid some 1.7 million of them.

The foreign minister also discussed the developing Afghan situation in the region saying for the regional economy to sustain, peace is a precondition.

The resolution to security issues lays in the talks alone, he said, adding that matters related to Indian occupied Kashmir and Palestine require solutions chalked out via huddles.

Before him, the joint presser was addressed by the Pakistani FM who praised Saudi support for the stance on the Kashmir issue and thanked the Kingdom for playing role in the Organisation of Islamic Cooperation session.

Saudi-Pakistani Supreme Coordination Council is being discussed as its establishment is mutually agreed upon, Qureshi said.