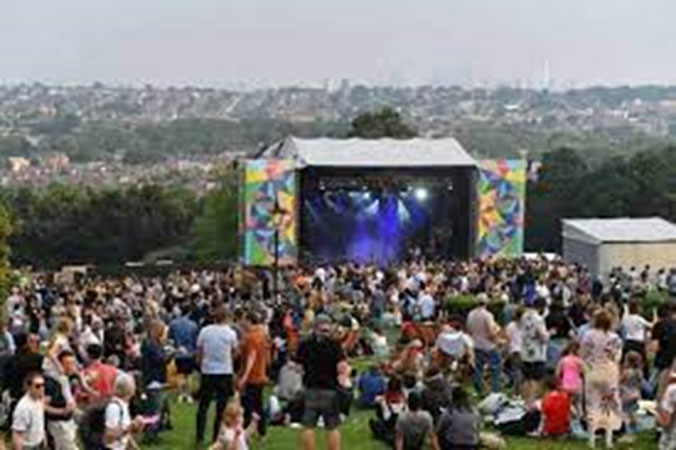 “I’m really excited to be here, I haven’t done anything like this in two years”, said Leonie Louis, one of the festival-goers, who decorated with sequins and flower crowns, braved the stormy weather to invade the grounds of north London’s Alexandra Palace, a legendary music venue that has previously hosted Pink Floyd, the Rolling Stones and Jay Z.

“It’s really nice to just see everybody out and drinking and just enjoying themselves,” Louis told AFP from the comfort of a deckchair in the palace gardens.

Kaleidoscope, which featured bands including Groove Armada and The Coral along with renowned comedians and writers, is one of the largest live events to have taken place in England since the country lifted its last coronavirus restrictions on July 19.

Louis, a 24-year-old management consultant, said that it was “a great time” to open up again, adding that people have “had enough of being cooped up and going in and out of lockdown.”

The health situation has, however, made organising the gig “hard”, according to Alexandra Palace event manager, Simon Fell.

He feared a last-minute cancellation, with sudden changes in health rules common in recent months.

“How do you sell tickets to people if you don’t really know if the event will take place? It’s a very difficult position to be in,” he told AFP.

“It has been really hard for all contractors, production teams, security teams. It’s been a challenging environment,” he added.

No masks were to be seen around the main stage, only the broad smiles of festival-goers, swaying with beers in hand and enjoying the panoramic view of London.

Families mingled with extravagantly-dressed ravers, united in anticipation for the return of music on the stage.

Joshua Brigts, 25, said he was a “little bit” anxious about the health risks, with the so-called delta variant causing a spike of infections across the country.

“But at the same time, I know everyone here has had a negative test in the last 48 hours,” he said.

“Whereas, walking through central London, there’s as many, if not more, people. So in a weird way it actually feels safer here than on my commute to work.”

Sitting next to him on a straw bale, his friend Stephen Parsons, 25, sporting a trendy floral shirt, said he was “overwhelmed” and that the afternoon music had given him a new sense of optimism.

“The music has completely lifted my spirits,” said the reveller, who came from Bedford, about 100 kilometres (60 miles) north of London, for the day.

He spent a year-and-a-half in lockdown watching many concerts online, but said that nothing could replicate the atmosphere of live music.

“The reason that I love coming to festivals is seeing the big bands, but also coming to these smaller stages and just experiencing that completely unique atmosphere,” he said.