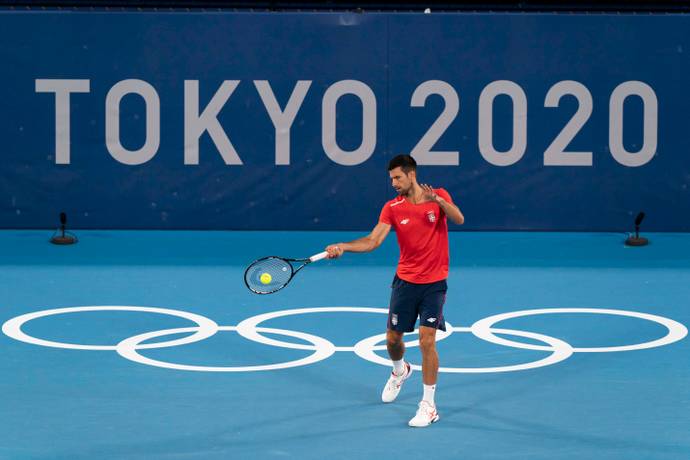 Novak Djokovic launched his quest for Olympic gold on Saturday with a straight-sets win at the Tokyo Games as tennis stars toiled in the searing summer heat on the opening day of the tournament.

World number one Djokovic, the undisputed favourite for the men’s title in Japan, easily dispatched Bolivia’s Hugo Dellien 6-2, 6-2, avoiding a repeat of his first-round exit five years ago in Rio. “It was challenging but I’m pleased to overcome the first hurdle,” said Djokovic, who was beaten by Juan Martin del Potro at the 2016 Olympics. “I think I was solid on the court. I could always do better but for a first match I’m satisfied.” Djokovic dodged the worst of the sweltering conditions at Ariake Tennis Park as late afternoon cloud cover provided some respite from the hot sunshine that confronted players in the earlier matches.

“It was the hottest day so far. Humidity is brutal. It’s certainly hot but also humid, the hard courts absorb the heat and it stays trapped in there. There was not much wind, not much breeze,” said Djokovic. The 19,900-seat venue, home to 11 outdoor courts and the showpiece Ariake Coliseum court, was almost empty, with fans barred from all but a handful of Olympic sites in Tokyo because of strict Covid-19 rules. Djokovic, a 2008 bronze medallist, is hoping to emulate Steffi Graf’s 1988 feat of winning the Golden Slam after already snapping up the Australian Open, French Open and Wimbledon this year. He will take on Germany’s Jan-Lennard Struff in round two, in an event missing half the men’s top 10 players, including 2008 Olympic champion Rafael Nadal and Roger Federer. One of the Serb’s chief rivals for gold in Tokyo is Daniil Medvedev, who saved a set point in the second set before completing a 6-4, 7-6 (10/8) win over world number 40 Alexander Bublik of Kazakhstan.

Second seed Medvedev, appearing at his first Games, broke Bublik in the opening game of the match and edged a close-fought second set to book a last-32 clash with India’s Sumit Nagal. “It’s some of the worst (conditions)… I’m not going to lie, but you have to play. That’s the Olympics, you go for the medal. You’re not here to cry about heat, it was really tough for both of us,” said Medvedev. Poland’s Iga Swiatek, the 2020 French Open champion, needed just over an hour to brush aside 172nd-ranked Mona Barthel 6-2, 6-2.

Sixth seed Swiatek, in the same quarter of the women’s draw as Japanese star Naomi Osaka, will play Spain’s Paula Badosa for a place in the last 16. “It was very hot as everybody is saying,” said Swiatek, whose father Tomasz competed in rowing at the 1988 Olympics in Seoul. “Even though I’ve practised here for a few days already, a match is totally different because the stress comes in and the conditions are different, you feel everything twice as much.” Reigning Roland Garros champion Barbora Krejcikova advanced when her Kazakh opponent Zarina Diyas retired down 5-2 in the first set. Last month’s beaten French Open finalist Anastasia Pavlyuchenkova inflicted a crushing 6-0, 6-1 defeat on Italy’s Sara Errani, the 2012 runner-up in Paris. Osaka was originally scheduled to kick off the tournament against China’s Zheng Saisai, but her match was pushed back 24 hours after she was chosen to light the Olympic cauldron in Friday’s opening ceremony. “Undoubtedly the greatest athletic achievement and honour I will ever have in my life,” Osaka wrote on social media.

The four-time Grand Slam champion will return to court Sunday following an eight-week break after she abandoned her French Open campaign for mental health reasons and then skipped Wimbledon. Andy Murray, the defending two-time singles gold medallist, began his fourth Olympics by combining with Joe Salisbury to knock out French second seeds Pierre-Hugues Herbert and Nicolas Mahut 6-3, 6-2 in the men’s doubles. Murray, now ranked a lowly 104th, takes on Canadian ninth seed Felix Auger-Aliassime in the first round of the singles.