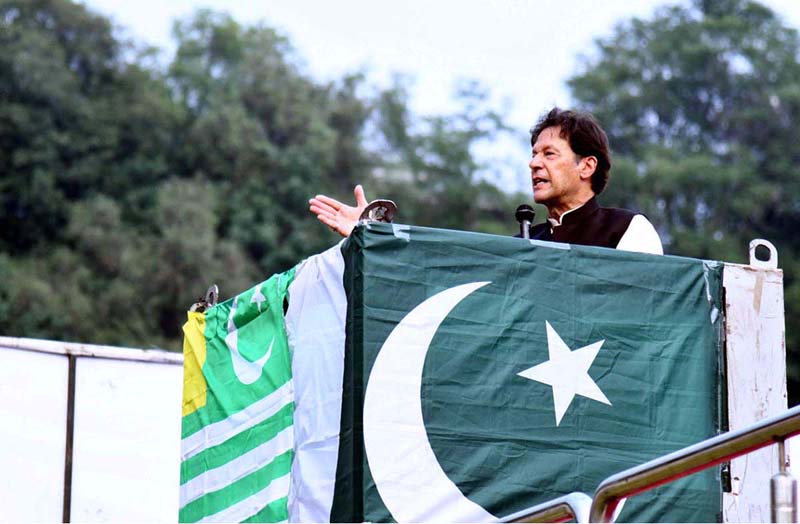 On Sunday, Prime Minister Imran Khan said that voters in the Azad Jammu and Kashmir Legislative Assembly elections on July 25 should consider if the party leader is honest (sadiq) and trustworthy (ameen).

He was speaking at a PTI rally ahead of the elections as part of the party’s electoral campaign.

“Ask yourself, when you vote, if these leaders are honest and trustworthy?”

Even if party leaders and candidates contesting the election are not honest, Prime Minister Imran Khan stated that “they would not be able to accomplish anything (honest)”.

“However, if your leader is truthful and the candidate is a liar, he will be afraid to do anything (dishonest). If the leader is not after money, he will not let others to pursue it “the prime minister stated.

The prime minister claimed that if one does study into the world’s poorest countries, they would discover that their state is similar to theirs since “Nawaz Sharifs” and “Asif Ali Zardaris” live there as well.

“Their leaders are plundering the country’s riches and transferring it to their own accounts.”

“Wherever there is poverty, there is the rule of force, not the rule of law. There are corrupt leaders, prime ministers, ministers, and members of parliament to be found.”

“This is why Hazrat Ali said that a system run by disbelievers may very well run, but a system where this is injustice, will never prevail,” the premier said.

Earlier, at the outset of his speech, the premier urged the large crowd gathered to wear masks, as the threat of coronavirus is far from over.

“You all are standing very close together. I fear that I will hear later that many coronavirus cases emerged due to this rally,” he said.

The premier also lauded the spirit and determination of the crowd gathered, receiving a loud roar in response.

“A large portion of my life was spent playing cricket under the sun. Sitting on the stage here I felt my clothes drenched in sweat. So when I look at all of you packed here together, I wish to pay special tribute to all of your determination,” he said.

PM Imran Khan said he thinks of the future of the people of the country, especially the youth. “I want our country to be such that when one travels with the Pakistani passport they should be admired. The world should look at us with respect. The green passport should be respect. We should become a great nation,” he said.

Speaking of the Arabian peninsula at the time of the Holy Prophet Muhammad (PBUH), he said there were two superpowers then, and the Arabs “had no standing” in society.

“They were bedouins and poor,” he said, adding that history bears witness that after Muslims migrated to Madina, one superpower knelt before the Muslims and after 14 years, another followed.

“The Arabs whom no one even looked upon, ended up ruling the world. What was the reason?”

The prime minister said that Muslims have been directed to follow the teachings of the Prophet and they will always achieve greatness if they do this.

“I want our nation to become a great nation. Unfortunately, we went off track. We began asking for aid and entering into other people’s wars. We brought destruction upon our own people. We lost our respect.

“No one respects a person who begs for alms and loans. You can test this out yourself,” PM Imran Khan said.

He said even if a person asks his parents or siblings for money repeatedly, they began looking at the person differently.

“No ones respects a country that does not stand on its own two feet,” he said.

The premier went on to say that a person who is truthful and just is respected the world over. He said if there is one leader he respects it is Quaid-e-Azam Mohammad Ali Jinnah. “Even his opponents viewed him as an honest and just man. They respected him despite being his opponents.”

PM Imran Khan said the country needs to change its ways. “We must adopt honesty and trustworthiness. Look at your own area. Look at Bhimber. Villages and cities all respect the man who is honest and just. This is a person’s nature (to be drawn towards such people). This is God-given.”

The premier said that when people go to the polls on July 25, they must ask themselves, if the party they are voting for has a leader that is honest and just.

“Or is he one who lied to the nation, acted well enough to rival Bollywood standards […] so much so that the women in our cabinet began crying after looking at his face?” the premier asked.

The prime minister was referring to PML-N supremo Nawaz Sharif who was allowed by the courts to go to London on medical grounds.

“We were afraid. Will he even be able to climb the stairs of the airplane?” remarked the prime minister.

“He left as one Nawaz Sharif and turned into a completely different man in London,” he added.

The prime minister asked the youth to also ask themselves this: “When the courts of Pakistan are free, when Imran Khan does not attack the Supreme Court armed with sticks, when Imran Khan does not pick up the phone and tell the judge to give a convict five years instead of three, when Lahore High Court is not controlled by the PTI and is free, then why have they run away abroad? Who are they afraid of?”

He went on to state that the PML-N “crony” Ishaq Dar is sitting abroad, and has been since even before PTI came into power, his sons are abroad, Nawaz Sharif’s sons have also fled abroad, so have Shahbaz Sharif’s son in law and son. “Who are you afraid of? The courts are independent.”

The prime minister said that if the courts were not free, if the government controlled the National Accountability Bureau, two PTI ministers would not have been jailed.

“No one is above the law,” the prime minister stated, and we have the Prophet’s example in front of us, who indicated that if he finds out that his daughter has committed a crime, she would be punished.

He claimed that politicians at the head of affairs who drove their countries to disaster had one set of rules for the powerful and another for the poor.

“The weakest parts of society are imprisoned, while the strong obtain an NRO and fly overseas to see their grandson play polo,” he added, referring to Nawaz Sharif’s grandson, Junaid Safdar, who recently attended a polo match played by his grandson and Maryam Nawaz’s son.