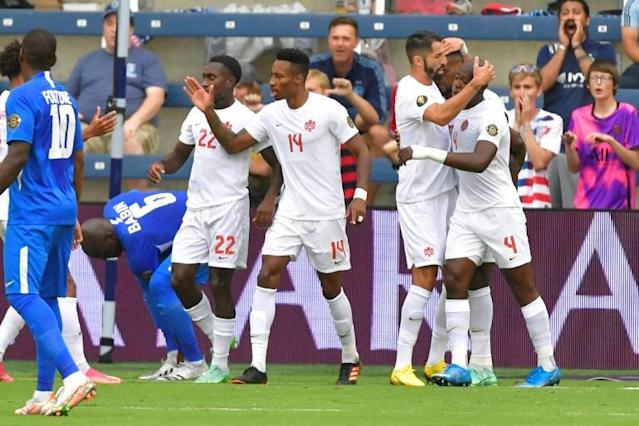 Canada romped to a 4-1 victory over Martinique on Sunday in the CONCACAF Gold Cup.

Canada, stung by the loss of Bayern Munich star Alphonso Davies to an ankle injury on the eve of the tournament, nevertheless had no trouble in their Group B opener in Kansas City thanks to goals from Cyle Larin, Jonathan Osorio, Stephen Eustaquio and Theo Corbeanu. All came after Martinique opened the scoring in the 10th minute on a strike by Emmanuel Riviere. Larin’s header put the Canadians back on terms in the 16th minute, Osorio fired them ahead in the 20th and Eustaquio’s 26th-minute strike saw them go into halftime with a 3-1 lead. Corbeanu finished off the scoring in the 89th, the 19-year-old running onto a cross from Lucas Cavallini and firing home from close range and then allowing himself a giddy goal celebration.

Group B action continued in Kansas City later Sunday with the United States taking on Haiti. The 16-nation tournament lost some of its lustre as the United States opted to field a virtual second-string team for the competition, with most of the country’s Europe-based players rested. Haiti came through the preliminary round with victories over St. Vincent and the Greadines and Bermuda July 2-6, but the Haitian side has also been rocked by positive Covid-19 tests for five players and one assistant coach, according to CONCACAF, which said the team was “offered the necessary support.”

Covid knocked Curacao out of the tournament before it started, an outbreak forcing them to withdraw. They were replaced by Guatemala, who played El Salvador in a Group A clash in Frisco, Texas, later Sunday. Mexico’s title defense got off to a rocky start on Saturday when they were held to a goalless draw by Trinidad and Tobago in Group A in Texas. Less than 15 minutes in Mexico saw Napoli winger Hirving Lozano carted off the field after he took an inadvertent knee to the face in a collision with Trinidad keeper Marvin Phillip. On Sunday, the Mexican federation said he had left hospital but confirmed Lozano was out for the tournament after undergoing “reconstruction work around his left eyebrow.”