The battle for Brazil’s indigenous land hots up 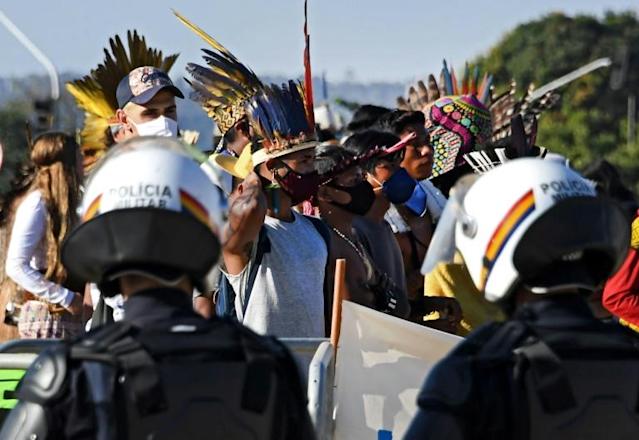 Brazil’s indigenous peoples are bracing for a legal battle with far-right President Jair’s Bolsonaro’s government as it seeks to rush laws through parliament to carve away at their land.

Indigenous people, who represent some 0.5 percent of Brazil’s population, hold about 13 percent of its land under ancestral rights guaranteed by the country’s 1988 constitution. These have been under threat ever since Bolsonaro came to power in 2019 on the promise of ceding “not one centimeter more” to Brazil’s native population. He has sought to open public land up for economic exploitation in one of the world’s biggest agricultural producers, and several bills are before parliament seeking to achieve this.

“We are living our worst time,” said Joenia Wapichana, the first indigenous lawmaker in the country’s history and the spearhead of a protracted legislative and legal fight. “These (parliamentary) projects which are a setback for us, are being voted on much faster now,” she said. Last month, a commission of the chamber of deputies — one of two houses of congress — approved a bill introduced already in 2007 to recognize as ancestral only land occupied by indigenous peoples when the 1988 Constitution was promulgated. The day before the decision, clashes between indigenous and security forces at a protest against the bill left several injured, including three police struck by arrows. The bill has yet to pass a full sitting of the chamber, and then the senate. A slew of other draft laws seek to authorize mining and farming on indigenous land where it is now illegal.

“The Constitution already provides for economic activity in indigenous areas and lands,” Mines and Energy Minister Bento Alburqueque insisted at a meeting with foreign correspondents last week. “What is there belongs to Brazilian society, and must be regulated taking into account the rights of indigenous peoples,” he added. Brazil’s original people also oppose a law passed in May to ease environmental requirements for farming and energy companies. Indigenous peoples and environmental groups claim the government’s moves are unconstitutional and fear a further acceleration of Amazon deforestation, which has picked up pace on Bolsonaro’s watch.

The president, widely accused of being a friend of the free market at the expense of the environment, has signed proclamations in the last two years to transfer the delineation of indigenous land to the agriculture ministry, and to allow big business takeovers of public land. But these endeavors have been paralyzed in congress, partly due to the president’s fraught relationship with the speakers of the chamber of deputies and the senate. This all changed in February when Bolsonaro succeeded in appointing two allies — Arthur Lira and Rodrigo Pacheco, which both enjoy the backing of the agri-business lobby — to these positions. “We are living the period of highest risk since Bolsonaro came to power,” said Mauricio Voivodic, executive director of WWF Brazil. “Especially the speaker of the chamber (of deputies) has shown a big appetite for advancing on (projects which threaten) the rights of indigenous peoples, reducing their territories.”

According to environmental lawyer Andre Lima, Brazil’s agri-business lobby believes the country already has “too many parks and conservation areas, and too much reserved native land” and that expanding conservation will “undermine rural development.” “We are a minority in parliament defending our rights,” said Wapichana, who has vowed to take the battle to the highest court if necessary. “If parliament makes our lives difficult, our only alternative is to seek support from justice… to save what remains of our indigenous land and natural resources.”