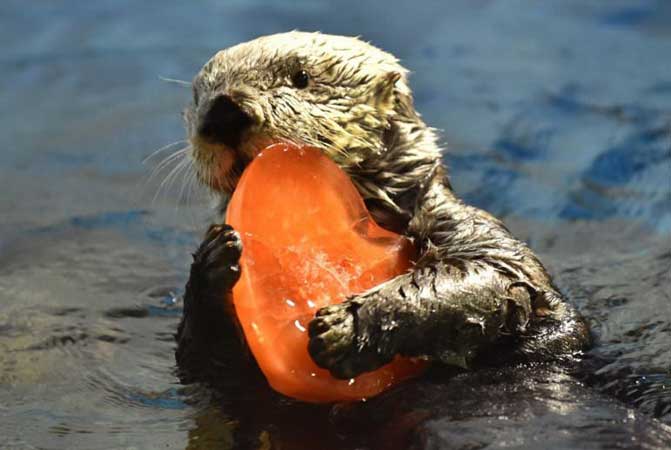 Sea otters are a hardy lot. The smallest of all marine mammals with the thickest fur of the animal kingdom, they can hold their breath for up to eight minutes while they dive for prey like clams and crabs, which they’re known to crack open using rocks.

An enduring mystery, however, was just how the mustelids manage to stay warm in the chilly waters of their Pacific habitat, bereft of the blubber that insulates seals, whales and walruses.

The answer, according to a new paper published in the journal Science on Thursday, is a unique energy conversion system whereby their muscle tissue “leak” large amounts of heat throughout their bodies.

That’s unlike other mammals, which have to put their muscles to work through exercise, or involuntary shivering, to achieve the same result.

Lead author Traver Wright of Texas A&M University told AFP that while sea otters’ dense, water-resistant fur offsets some heat loss, it isn’t enough by itself to cope with the frigid waters off Alaska, where most of them reside.

Scientists already knew the sea otters burn a lot of energy — approximately three times greater than predicted for mammals of their size, and to keep up with the demand, they may consume up to 25 percent of their body mass in a day.

It was unclear, though, which tissues were making use of this energy and how it was going towards producing heat.

To find out, Wright and colleagues took muscle samples from sea otters that were already dead, or, more happily, had been rehabilitated by the Monterey Bay Aquarium and were being prepared for release.

They then used a device to measure oxygen consumption.

‘Making heat by being inefficient’

The main function of muscles is generally to be able to move the body, but in the otters, much of the metabolic energy produced by breaking down sugars and fats was lost as heat instead of being used by mitochondria, the powerhouses of cells, to do work such as powering muscle contraction.

This effect had been predicted for polar animals, but was observed for the first time in sea otters in the new paper.

“One of the interesting things that we found is that they’re really good at making heat by being inefficient,” said Wright.

What the team observed would be considered wasteful in land mammals like humans, “but if you’re an animal that’s trying to warm up, then that ‘wasted’ energy and heat is a good thing.”

In other words, ideal for helping maintain a body temperature of 37 degrees Celsius (98.6 degrees Fahrenheit) in freezing conditions.

The team found that this “thermogenesic” effect was present in sea otters from the time they were babies to adults, and there was no difference in captive and wild-raised animals.

Sea otters and marine mammals more broadly might have evolved such traits when their terrestrial ancestors began taking to the oceans 50 million years ago, but that hypothesis will require more research to confirm.

“If you can figure out how to increase the leak and metabolic rate, you could theoretically have humans revving up the metabolism and burning off additional calories.”