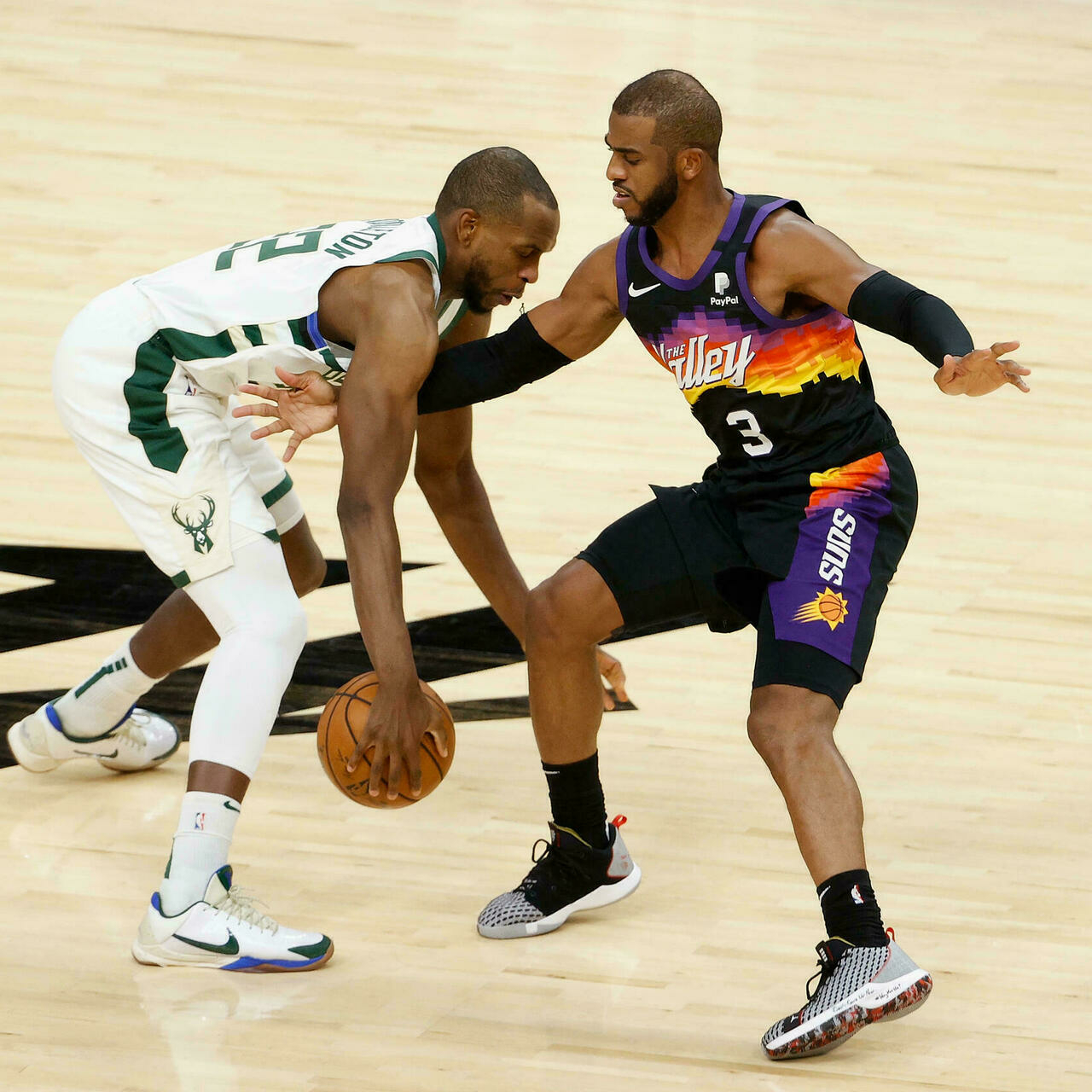 Two long-frustrated franchises, the Phoenix Suns and Milwaukee Bucks, will meet in the NBA Finals starting Tuesday and one of them will put an end to an epic title drought.

The Bucks captured their only title half a century ago while the Suns have never claimed the crown since the club began play in 1968. With star guard Chris Paul reaching the best-of-seven championship series for the first time in his 16-season career, the Suns have reached the NBA Finals for the first time since 1993. A Charles Barkley-led Suns squad lost to the Michael Jordan-sparked Chicago Bulls 28 years ago and the Suns also dropped the 1976 NBA Finals to the Boston Celtics. Many thought Paul, an 11-time NBA All-Star and two-time Olympic champion, was too far past his prime at 36 to spark a title run. Instead, the poised veteran leader averaged 16.4 points, 8.9 assists, 4.5 rebounds and 1.4 steals a game for the Suns after arriving in a trade from Oklahoma City last November.

“I’ve wanted to be part of this all of my career,” said Paul, who writes “Can’t give up now” on his shoes before every game. The Bucks had not reached the NBA Finals since 1974 and won their only title in 1971, when legendary center Kareem Abdul-Jabbar — still known then as Lew Alcindor — sparked a sweep over the Baltimore Bullets. Greek superstar Giannis Antetokounmpo, the Bucks’ new dominating big man, has reached the NBA Finals after taking NBA Most Valuable Player honors the previous two seasons only to suffer playoff disappointment. Whether or not the 26-year-old will be able to play, however, is another question. Antetokounmpo missed the last two games of the Eastern Conference finals after hyperextending his left knee in game four against Atlanta.

The Bucks went a league-best 60-22 in the 2018-19 campaign and won a playoff series for the first time since 2001. They reached the Eastern Conference finals and grabbed a 2-0 lead only to drop the next four games and fall to eventual NBA champion Toronto. The next season, Antetokounmpo sparked the Bucks to a league-best 56-17 mark, but suffered a right ankle injury and missed most of the last two games as the Bucks lost to Miami in five games in the second round. While they didn’t produce the league’s best record this season, the Bucks did reach the final despite Antetokounmpo’s injury. “Certainly any time you lose you’ve got to be honest with yourself,” Bucks coach Mike Budenholzer said. “When this group hasn’t been able to advance it has hurt, it has been hard and the off-season the guys have put the work in — but there’s still more to be done.”

The Bucks and Suns outlasted teams with more wins to reach the final, but only one fairy tale run is going to have a happy ending. “This is like a storybook, going somewhere I’ve never been,” Suns star Devin Booker said. “It has been a long time coming to get to this moment. This is nice right here, but we still have work to do.” Suns coach Monty Williams, who says he likes Booker’s “fearlessness” and killer instinct, is enjoying seeing Paul and others revel in the moment. “I’m enjoying watching our players enjoy this moment,” Williams said. “I know how badly (Paul) wants to win.” Booker is averaging 27.0 points, 6.4 rebounds and 4.8 assists a contest in the playoffs while Paul is contributing 18.1 points, 8.7 assists and 3.9 rebounds a game in the post-season to make the Suns bright. Bahamas big man Deandre Ayton has 16.2 points and 11.8 rebounds a game.

The Suns will enjoy five days off before the NBA Finals opener while the Bucks will have only two. “We’ve had kind of long, extended pauses between each round and I’m kind of excited to try it without one,” Budenholzer said. “Maybe we can be the team that’s in a rhythm. It’s a quick turn, but we’ll be ready.” Antetokounmpo has averaged 28.2 points, 12.7 rebounds and 5.2 assists a game but has had great support from Khris Middleton — with 23.4 points, 8.0 rebounds, 5.1 assists and 1.5 steals a game — and Jrue Holiday with 17.6 points, 8.4 assists and 5.6 rebounds a game. “To get to the finals is amazing,” Holiday said. “It’s a feeling I’ve never felt before.” “Everybody stays ready. Everybody plays together. Everybody stays locked in,” Middleton said. “That’s all you can ask for.” Phoenix won both regular-season games against Milwaukee but only by one point each time.