‘It’s a rush of culture!’ Americans return to Paris 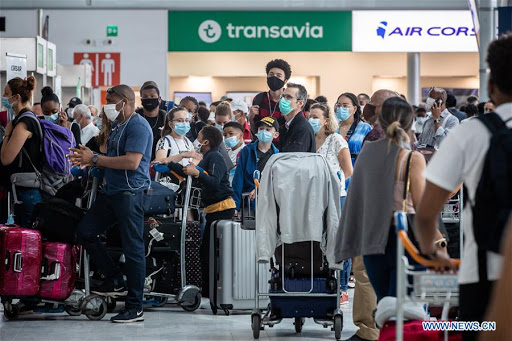 They’re back! After vanishing from Paris for a year and a half, American tourists have returned, Covid vaccination certificates in pocket, as part of a grand reopening of the country’s tourist sector.

France, which was the world’s top tourism destination before the coronavirus pandemic, began welcoming back Americans on June 9.

“It’s amazing! We’ve been wanting to come back since last year,” said Padmini Pyapali, an engineer on a tour of Greece and France with five friends, who were having a drink on a cafe terrasse in the Montmartre district.

“It’s just a rush of culture and we really missed it,” she said.

The United States was France’s biggest source of non-European tourists before the virus struck, with over four million visiting the country each year.

Americans are also among the biggest spenders, making them a welcome sight for retailers and tour operators in Paris, where English is again echoing around the feet of the Eiffel Tower and the Sacre-Coeur basilica.

The US has the top “green” rating on France’s Covid map of the world, meaning visitors need to show only that they have been fully vaccinated or present a clean PCR test.

Crystal McDaniel from Dallas, with her husband Brandon, made a beeline on arrival for the Eiffel Tower with their two daughters, who came away clutching miniature models of the Iron Lady.

Crystal expressed joy at being able to roam Europe again.

Bad weather for much of June failed to dampen the mood of the returnees, who for the moment represent a trickle, not a flood.

John Sivak, a real estate agent from Atlanta who took a four-hour bike tour of Paris with his wife Kristin, was delighted to find tourists still thin on the ground in the city less than a month after France reopened to tourists.

“I guess we’re one of the first ones to come from the US and it’s exciting!” he said.

“All of our friends back home are jealous, they’re seeing the pictures on Facebook and Instagram and Snapchat,” he added during a stop at the Flame of Liberty, a gold-leaf-covered replica of the flame from the Statue of Liberty’s torch, on the banks of the Seine river.

Kristin too was smitten.

“We went to the Eiffel Tower last night and all the lights were twinkling when the sun went down. Everybody was out on the grass having some wine on a blanket and just talking with their family and friends, so it was very relaxing.”