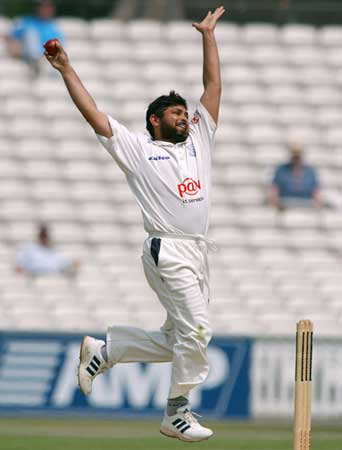 LAHORE: One of Pakistan’s finest legspinners Mushtaq Ahmed celebrates his birthday on Monday (today). Mushtaq, also known as Mushy, turns 51 today. When he was in his prime, with his right arm whipping over and the ball spitting both ways from the pitch, Mushtaq was mischief personified. Having style of his idol Abdul Qadir, Mushtaq succeeded him in the national squad in 1989. Mushtaq was a match winner like his role-model and one of the finest wrist spinners in the world. He was Pakistan’s frontline spinner in the 1990s. A short man, Mushy had a short run up and would throw both his hands simultaneously in the air before delivering the ball. The weird action and his repertoire of variations which included a well disguised googly made it hard for the batsmen to pick, who often were forced to guess which way the ball would spin. Born on June 28, 1970 in Sahiwal, Mushtaq was at his most prolific internationally between 1995 and 2000. He played a big part in Pakistan’s 1992 World Cup campaign, and memorably deceived Graeme Hick with a googly in the final. Pakistan won the tournament and Mushtaq’s bag of 16 wickets was a vital contribution. Typically erratic, Mushtaq also took a couple of horrible pastings off Australia –– 1 for 145 off 36 overs in Rawalpindi in 1994-95, and 3 for 194 off 38 in Brisbane five years later.

He was named as one of the Wisden Cricketers of the Year. Praising Mushtaq in 1997, Wisden wrote: “By taking 45 wickets in six Tests for Pakistan between November 1995 and August 1996 Mushtaq Ahmed confirmed his status as the final member ––– alongside Shane Warne and Anil Kumble ––- of a glittering triumvirate of wrist-spinners who adorn the modern game. Mushtaq is the most enchanting of the lot.” It was indicative of a spinner who was at the top of his game in international cricket. In an international career that spanned from 1990 until 2003, he claimed 185 wickets in Test cricket and 161 in one-day internationals.

A glorious season for Sussex in 2003, when he became the first bowler in five years to take 100 wickets in the English season, a feat he and they repeated in 2006 and the following season (2007). However, he put his future with the county at risk by signing with the unsanctioned Indian Cricket League. Persistent knee trouble forced him to retire from first-class cricket towards the end of the 2008 season and he was quickly snapped up by the England and Wales Cricket Board (ECB) as England’s spin-bowling coach. From 2014-2016, he served Pakistan cricket team as bowling coach. In 2018 and 2019 he served as the assistant coach and spin consultant of the West Indies national cricket team. At present, Mushtaq is attached with the Pakistan Cricket Board (PCB) as spin bowling consultant at the National Cricket Academy.