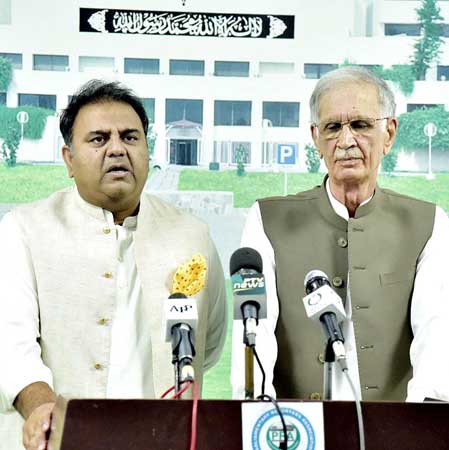 The government and opposition on Thursday evolved consensus and decided to ensure smooth conduct of ongoing budget session in the Parliament that remained distributed during the last three days due to unpleasant episodes.

“It is a welcoming development that the government and opposition have reached on an agreement. From now onward, the parliamentary proceeding will be carried out as per routine,” Minister for Information and Broadcasting Chaudhry Fawad Hussain told media along with Minister for Defence Pervaiz Khattak at the Parliament House. He said parliamentary teams of government and opposition held a detailed discussion over the unpleasant environment in the parliament and admitted that it had brought embarrassment for the entire House.

The minister said the meeting was of the view that there should not be such an environment that could affect functioning of the institutions. Giving details of the meeting, he said the government team was led by Pervaiz Khattak, comprising Minister for Planning and Development Asad Umar, Minister of State for Parliamentary Affairs, PTI Chief Whip Amir Dogar and he [Fawad] himself, while opposition team was consisted of PML-N’s Rana Sanaullah, Ayaz Sadiq, Rana Tanvir, and PPP’s Raja Pervaiz Ashraf and Shazia Marri.

The information minister said the meeting also proposed to form a parliamentary committee, comprising members from both treasury and opposition benches, that would be responsible for the conduct of their respective members in the House. The meeting, he said, also agreed that no individual would be targeted and insulted during budget speeches of parliamentarians from the both treasury and opposition benches. Till formation of the committee, he said, the leadership of parliamentary parties would ensure practicing parliamentary norms by their respective members in the National Assembly.

Fawad said the committee would also look into the possibilities of increasing the powers of the National Assembly speaker. He said the government team has requested the opposition to withdraw the no-confidence motion it submitted against Deputy Speaker Qasim Khan Suri.

Later in the day, Leader of the Opposition in the National Assembly Shehbaz Sharif said the opposition, as per request of the government, has jointly decided to withdraw the motion against Suri.

To a question, Fawad said Pervaiz Khattak had chaired a Parliamentary Committee meeting of the Pakistan Tehreek-i-Insaf (PTI) and the government allies, during which 186 members had shown complete confidence in speaker and deputy speaker of the National Assembly. “We [PTI] want a good environment in the Parliament,” he said, adding that the government believes in promoting supremacy of the constitution and democratic norms in the country.

Minister for Defence Pervaiz Khattak said the government would easily get passed the federal budget for the fiscal year 2021-22 as it has the required number in the National Assembly for its approval. He said that disturbance in the parliament during the budget session from both the government and opposition sides is deplorable, and it is also not good for the parliament.

A day after barring seven lawmakers from entering the National Assembly for creating ruckus during the budget session in the Lower House of Parliament, Speaker Asad Qaiser on Thursday lifted the ban on their entry. The assembly secretariat has informed the lawmakers and security staff about the entry ban having been lifted.