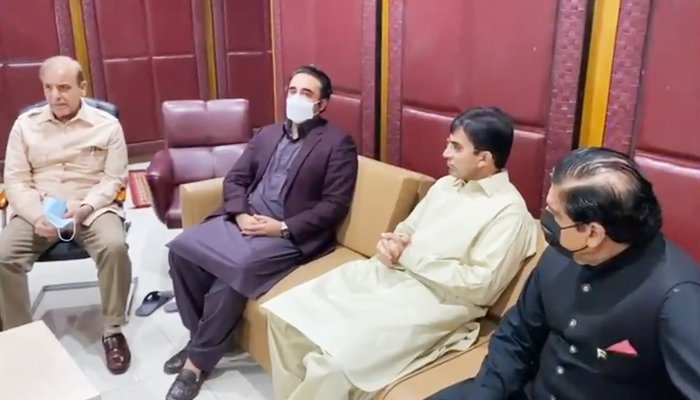 On Wednesday after a joint meeting of the opposition parties in which prominent leaders such as Shehbaz Sharif and Bilawal Bhutto were present, it was decided that the United Opposition will launch a no-confidence motion against National Assembly Speaker Asad Qaiser.

It was also agreed to form a united opposition committee to vote no-confidence against the speaker.

Sources said the advisory committee would be tasked with no-confidence in the names of the committee members.

The opposition has rejected the Speaker’s decision to ban 7 members from entering the Parliament until further notice.

Letter to the Speaker NA

In a letter to the Speaker, the opposition members wrote that the decision taken by the speaker on this issue will either restore the dignity of the Parliament and the Speaker or destroy them forever. They expressed hope that Assad Qaiser would have the moral courage to rise to the occasion.

They pointed out that the speaker was personally chairing this National Assembly sitting and was witness to the events that took place; in fact, he inexplicably adjourned the sitting and left the chair on three separate occasions. Assad Qaiser was the custodian of the House and was responsible to maintain decorum, and protect the dignity of the members and the house, they added.

The opposition said this was the first occasion in the history of the National Assembly of Pakistan, and possibly parliamentary history worldwide, that Treasury Bench MNA’s and Government Ministers defied the Speaker and physically attacked the Opposition. They accused the speaker of turning a blind eye and remaining silent on the violence and abuse that unfolded before his eyes.

The letter signed by leaders of all opposition political parties said it was unfortunate that the Leader of the house has been absent and silent over these events; in fact, it is inconceivable that such behaviour by the Treasury’ Bench MNA’s and Government Ministers could have taken place without his consent.

What happened in the Assembly?

During the speech of opposition leader in NA Shehbaz Sharif on the federal budget a ruckus broke out when parliamentarians started hurling abuses at each other and throwing the budget books. One of the budget books that were being thrown injured PTI MNA Maleeka Bukhari, while one that was hurled at Shehbaz Sharif landed on the dais in front of him. One of the security personnel at the NA was also injured. The speaker continuously made requests and asked the lawmakers to maintain decorum but he was ignored.

He added that the attitude of the government is reprehensible.

Bilawal Bhutto said that he was planning for the future strategy together with the opposition leaders.

Earlier, however, the PPP media cell posted that Chairman PPP Bilawal Bhutto Zardari had a telephonic conversation with the National Assembly Speaker Asad Qaiser. The speaker assured Bilawal that strict action will be taken against perpetrators of violence in the National Assembly.