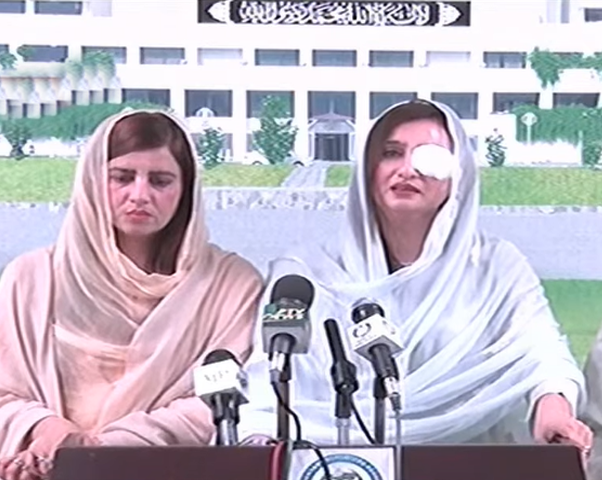 PML-N and PTI lawmakers are blaming each other for the chaos that erupted in the National Assembly during which the members hurled abuses and threw budget books at each other.

While talking to the media, Zartaj Gul and Maleeka Bukhari raised demands for strong action against all those PML-N members who attacked the women members of the PTI yesterday.

Maleeka Bukhari, whose eye got severely injured in the attack, said that the NA speaker should take notice of yesterday’s incident. She demanded an apology from the PML-N leaders who were the perpetrators.

Zartaj Gul said the PML-N is no longer a political party. She said that no woman is safe from their treacherous behaviour, bullying and character assassinations of the opposition party.

They also said that the PML-N has no respect for government bodies and it has a history of attacking various institutions including the supreme court.

Bukhari termed yesterday’s incident as a ‘black day’’ in the parliamentary history of Pakistan where the PML-N crossed all possible limits.

The reason she gave for their behaviour was the unacceptability of the ‘people-friendly’ budget that was presented by the PTI government.

“The NA speaker has failed to deliver. He had already lost our trust and now has lost his government’s as well.”

He accused the PTI lawmakers for throwing books and hurling abuses.

Khaqan Abbasi said that he believes that no action will be taken by the speaker of the National Assembly. He lashed out at Asad Qaiser, saying ministers were using filthy language in front of him but he couldn’t do anything.

He suggested that the speaker should resign in protest if he cannot maintain the decorum of the National Assembly.