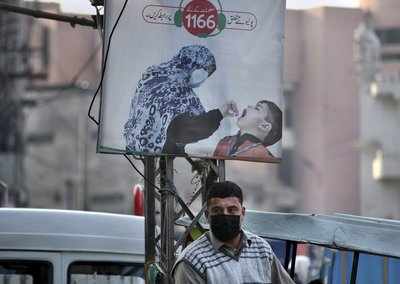 Two policemen were shot dead while escorting a polio vaccination team in northwestern Pakistan on Wednesday, the second such attack this year.

Healthcare workers flanked by a security detail were going door to door in a village near the city of Mardan, Khyber Pakhtunkhwa province, when they came under attack. Polio has been eradicated across the world apart from in Afghanistan and Pakistan, where distrust of vaccines and vaccination teams is rife. “Two attackers came on a motorcycle and one of them shot at the policemen, both of whom died at the scene,” district police officer Zahid Ullah told AFP.

A second police official, Omar Ali, confirmed the toll. “The women polio workers were inside the home to administer the polio drops when they shot the policemen,” Ali told AFP. No group has claimed responsibility for the incident, but Islamist opposition to vaccines has grown in Pakistan since the CIA organised a fake inoculation drive that helped track down Al-Qaeda founder Osama Bin Laden in the province a decade ago.

Healthcare teams must also battle against conspiracy theories that vaccines are a Western plot aimed at sterilising Muslim children. In January, a policeman was killed in a similar drive-by shooting in the province, while in March, gunmen killed three women involved in a polio immunisation programme across the border. The latest week-long polio effort in Pakistan aims to vaccinate more than 33 million children under the age of five with the help of around 260,000 frontline workers. The country of 220 million has so far only reported one polio case this year, but the number soared to 147 in 2019 before dropping to 84 last year.