A photo of a road with large potholes has been shared tens of thousands of times on Facebook alongside a claim it was taken in Peshawar, Pakistan after some light rain. The claim is false; the photo was taken in India, not Pakistan.

The photo has been shared more than 20,000 times after it was published in this Facebook post on July 16, 2019. The photo shows a road covered in potholes. A truck can be seen partially swallowed by one pothole. 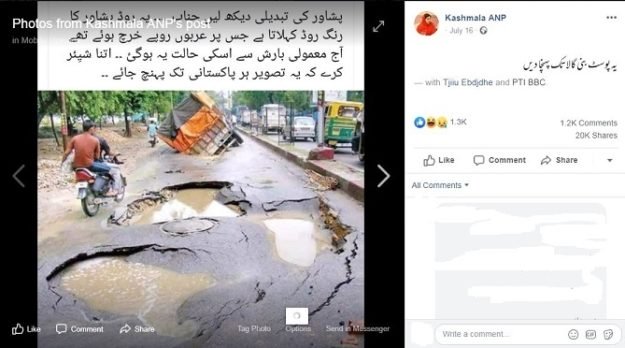 The Urdu-language text superimposed above the image translates to English as: “Look at the change in Peshawar – This road is called Peshawar’s Ring Road, on which billions of rupees were spent, and today after a round of light rain, this is its condition. Share this widely so that it reaches every Pakistani.”

The Peshawar Ring Road is a highway located in Peshawar, the capital of the Pakistani province of Khyber Pakhtunkhwa.

The post’s caption translates to English as: “Send this post to Bani Gala.” Bani Gala is the private residence of Pakistani Prime Minister Imran Khan.

A reverse image search on Google found the same photo published by online news site Indiatimes.com here on April 30, 2015. The photo’s caption states: “No Road Left: When it rains in India, the roads get very damaged. But this road in Allahabad got damaged to the next level!”

Allahabad, or Prayagraj, is a city in the Indian state of Uttar Pradesh.

The photo has been circulated online since at least 2012 alongside a description that it shows a road in India, including here and here. Posters seen on the lampposts on either side of the photo in the misleading post are written in Hindi, one of the official languages of India. One advertisement translates to English as: “Gemini Circus”.

The Times of India reported on the Kerala-based circus’ falling popularity in this September 2019 report. Kerala is a state located in India’s southwest.

Below is a screenshot of the photo in the misleading post with the posters circled in red by AFP: 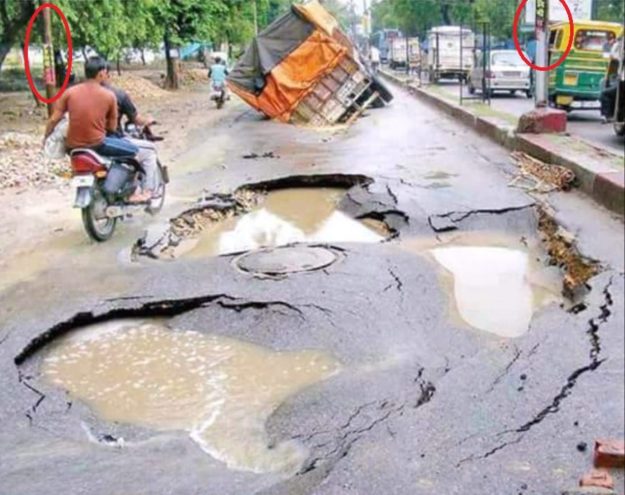