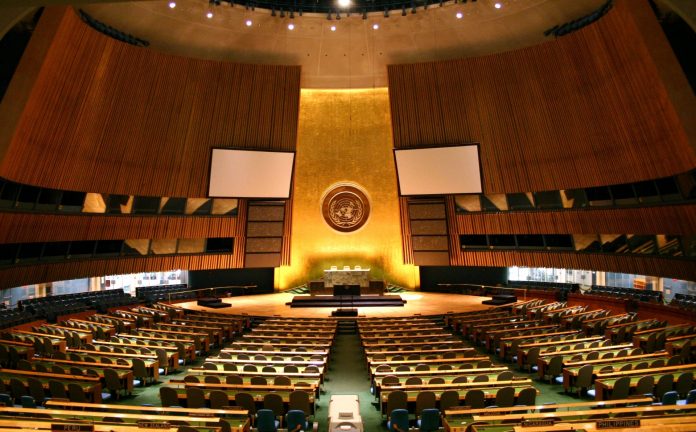 UNITED NATIONS: The United Nations General Assembly (UNGA) has passed a Political Declaration titled “Our common commitment to effectively addressing challenges and implementing measures to prevent and combat corruption and strengthen international cooperation” at a special session to discuss corruption. The session adopted the declaration with blueprints to help countries tackle bribery, money-laundering, abuse of power and a raft of related crimes

The three-day special session, which began on Wednesday and ended on Friday night, brought together heads of Government and State, ministers, high-ranking diplomats, as well as representatives of observer entities and civil society.

Pakistan was represented by Justice (r) Javed Iqbal, head of the National Accountability Bureau (NAB). Pakistan’s Ambassador to the UN, Munir Akram, also addressed the session in his capacity as the President of the UN Economic and Social Council (ECOSOC).

By its terms, Member States expressed concern about the serious threats posed by corruption to the stability and security of societies, as well as the phenomenon’s potential to undermine the institutions and values of democracy and jeopardize sustainable development and the rule of law.

They recognized the negative impact corruption can have on access to basic services and human rights, while noting that it may also exacerbate poverty and inequality and disproportionately affect the world’s most disadvantaged people.

The Assembly noted that the loss of resources caused by corruption may constitute a substantial proportion of State resources — with a particularly negative impact on developing countries — and that those challenges have been exacerbated by the ongoing effects of the COVID-19 pandemic.

Pledging to step up efforts to promote and implement global anti-corruption obligations and commitments, and to demonstrate the necessary political will, Member States also made a series of commitments in seven key areas: prevention; criminalization and law enforcement; international cooperation; asset recovery; technical assistance; anti-corruption as a driver of sustainable development; and advancing a forward-looking anti-corruption agenda.

Among other things, they committed to fostering a culture of accountability, transparency, legality, integrity and fairness in the public sector, including by applying codes of conduct and other ethical standards for all public officials.

They stressed the role of supreme audit institutions and other oversight bodies, pledged to promote transparency and committed to identify and manage conflicts of interest — as well as address the root causes, vulnerabilities, and risk factors leading to corruption. They also agreed to take measures to prevent financial systems from being abused to hide, move and launder assets stemming from corruption.

By other terms of the Political Declaration, the Assembly urged States parties to the Convention to establish as criminal offenses the bribery of national, foreign or international public officials.

They committed to helping build the capacity of law enforcement and judicial authorities for the successful investigation, prosecution and adjudication of corruption and related offences, and to provide a safe and enabling environment to those who expose, report and fight corruption.

They also encouraged States parties to remove barriers to the recovery of assets and ensure that domestic legal frameworks allow States parties to initiate legal proceedings to claim property acquired through the commission of an offence established by the Convention.

Reiterating the central role of the Convention and its Conference of the States Parties in helping to boost States parties’ capacity to combat corruption, the Assembly encouraged the United Nations Office on Drugs and Crime (UNODC) to develop and share a ‘comprehensive, scientifically sound and objective statistical framework’, grounded in methodological work and reliable data sources, to support States in those efforts.

Member States also committed to ensuring that corruption safeguards are integral elements of their efforts to recover from the COVID-19 pandemic, and that measures are in place to prevent and combat corruption when responding to or recovering from future crises