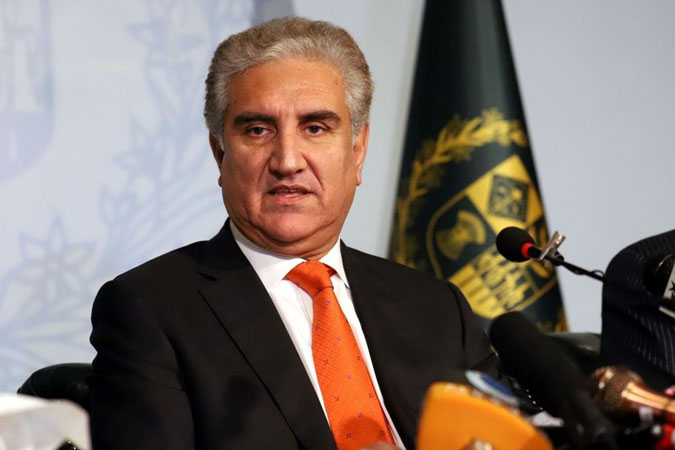 Minister for Foreign Affairs Shah Mahmood Qureshi on Saturday said Afghan National Security Advisor Hamdullah Mohib should be ashamed of himself for maligning Pakistan, and advised him against using harsh language against Islamabad in future.

“The national security adviser of Afghanistan carefully listen to me … as the foreign minister of Pakistan I say that no Pakistani will shake your hand or talk with you if you don’t desist from the kind of language you are using or the accusations you’re making against Pakistan,” Foreign Minister Qureshi said while addressing party workers here, as he hit out at Hamdullah Mohib for his comments against Pakistan and called on him to ‘reflect and correct his behaviour’.

Qureshi said Pakistan has suffered a huge cost in terms of lives lost and financial consequences from terrorism, adding that Pakistan is only concerned with peace and stability in the region. “You should be ashamed and you should be guilty at your words and my blood is boiling ever since your speech in Nangarhar,” he said. “Correct your behaviour and reflect on it. I say this to the international community that if this behaviour continues, then this person, who calls himself the national security adviser of Afghanistan, will actually be playing the role of a spoiler [for peace],” her maintained.

The foreign minister said the Afghan NSA was creating obstacles on Afghanistan’s road towards peace and trying to worsen the situation instead of improving it. “Therefore, the Afghan nation and the wise citizens of Afghanistan, who wish for peace, should urge him to reflect on his behaviour because it is not correct,” he added.

The foreign minister was responding to comments made by the Afghan national security adviser during a visit to Nangarhar province earlier in May, during which he had called Pakistan a ‘brothel house’, according to a Voice of America report. The report said Mohib routinely accuses Pakistan of allegedly providing support to the Afghan Taliban.

Qureshi noted that Pakistani officials from the prime minister to the army chief to the foreign minister had visited Kabul for peace yet the NSA had still likened Pakistan to a ‘brothel house’. He said the world had acknowledged Pakistan’s role for peace in Afghanistan.

The VoA had reported in May that Pakistan had conveyed to the leadership in Afghanistan that it would no longer conduct official business with national security advisor because of his ‘abusive outburst’ against Islamabad.

Addressing the workers, Qureshi also expressed his gratitude to the National Assembly and the Senate for passing unanimous resolutions that showed the ‘nation was one on the issues of Palestine and Kashmir’.

The Senate resolution, passed last week, had condemned Israel’s “war crimes” in Palestine and called upon the international community to take “immediate, effective and concrete steps” to save the Palestinians from the “fascist Israeli war machine”.

Hailing Pakistan’s efforts for the Palestinian cause at the UN, Qureshi claimed that Pakistan’s promotion of the issue had yielded success in stopping the “oppression on Muslims”. He added that another “diplomatic success” was attained when the UN Human Rights Council adopted the Pakistan-sponsored resolution on behalf of the Organisation of Islamic Cooperation and decided to create an inquiry commission into systematic abuses in the Palestinian territories and inside Israel.

Qureshi said he would invite foreign ministers of Muslim nations to Islamabad in March 2022 to propagate the Kashmir issue and present the case of Kashmiris to them. He said while presenting Palestine’s case at the United Nations, he had been reminded of Indian Illegally Occupied Jammu and Kashmir (IIOJK) and the similarities in the demands of the people in Palestine and IIOJK. “I am promising you that the way I fought the case of Palestinians, if God grants me time, then in March 2022 I will invite the foreign ministers of the Islamic world to Islamabad and try to rally them on the Kashmir issue. The case of Kashmiris, which is based on truth and justice, will be presented to them,” said the foreign minister.

Qureshi also addressed his interview with CNN that spurred accusations of anti-Semitism against him. “When the pro-Israel lobby tried to attack me, every child capable of using social media in Pakistan rose to my defence,” the foreign minister said. “A voice came from the whole ummah that this accusation of anti-Semitism is not correct and people defended Multan’s lawyer with facts and figures. This is a big honour from God that I didn’t have to defend myself,” he further said. “A planned attempt was made in the CNN interview to pressurise me,” he claimed.