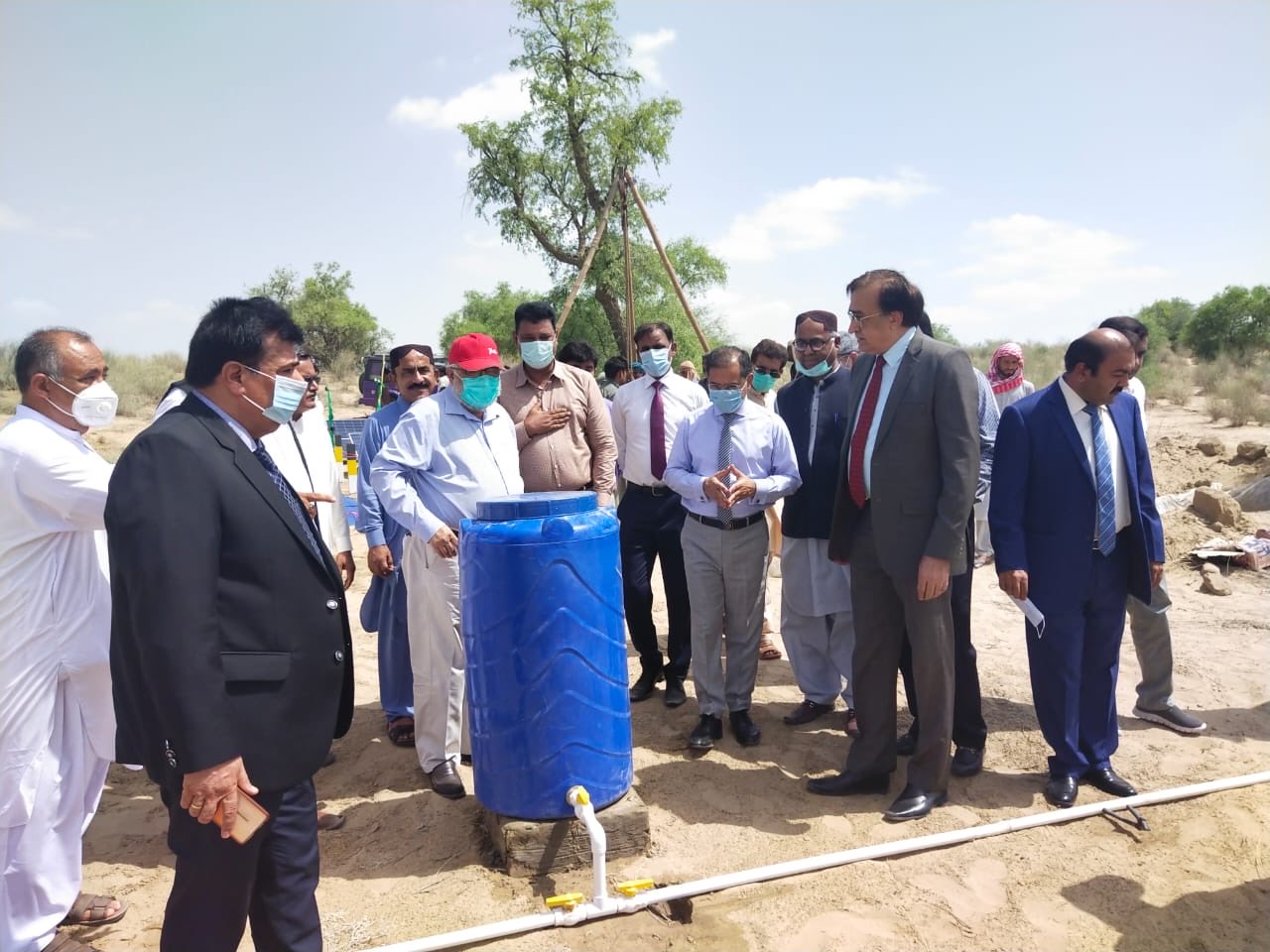 MITHI: The government of Sindh is likely to provide an 80 percent subsidy on the high-efficiency irrigation system to the farmers across Sindh and biosaline agriculture to be adopted as an official agriculture practice to combat the water scarcity problems in the province. This was announced by Abdul Rahim Soomro, secretary of agriculture Sindh, during a one-day conference on Biosaline Agriculture in arid areas of Sindh. The event was organized by the district administration of Tharparkar, Sindh Engro Coal Mining Company, the agriculture department, and other partners.
The conference was attended by government and private sector experts, academicians,  leaders of the farmer organizations, development sector organizations, and media persons to discuss the potential of biosaline agriculture opportunities in combating water unavailability due to climate change and its terrible impacts in the rain-dependent arid zones of the country.
The conference unanimously passed recommendations for policy actions for the government of Sindh to translate them into policy actions. The conference said saline water resources of Thar might be considered an opportunity and the experience of organizations like Thar Foundation be utilized for furthering the practice across the region. Salt tolerant plants should be introduced along with regular water quality monitoring might be ensured, linkages between the public and private sector, academia, and farmers to be developed for experience sharing and introduction of the high-efficiency irrigation system should be installed in Tharparkar, the establishment of nurseries and creating demand of biosaline agriculture products by growing salt eating halophyte crops and fish farms on saline water should be practice in all arid areas of Sindh.
Chairing the concluding session, Secretary Agriculture, Abdul Rahim Soomro said that the recommendations of the conference would be tabled with the members of the Sindh Cabinet for translating policies into implementable action programs for adopting biosaline agriculture practice in the province. He announced that it had been principally decided by the government of Sindh to provide an 80 percent subsidy to the farmers of Sindh. The decision would be formally approved by the Sindh Cabinet, he added.
He also announced that on the pattern of the Pakistan Agriculture Research Council, Sindh Agriculture Research Council was being established to promote and enhance agriculture productivity in Sindh.  A committee on Biosaline Agriculture would also be formed representing all the public and private sector stakeholders and academia and corporate and development sector organizations of Sindh, he said. The secretary of agriculture also said that the Sindh government wanted to see Thar into a green region through biosaline agriculture initiatives by adopting high-efficiency irrigation techniques. Deputy Commissioner Tharparkar, Mohammad Nawaz Soho welcomed the audience of the conference and said that the district administration would provide all-out support to promote biosaline agriculture in the region to combat droughts. He said that small efforts undertaken by Thar Foundation and some other organizations had very successful stories.
Ahmed Munib, director of site operations, Sindh Engro Coal Mining Company (SECMC) said that 80 billion cubic meters of biosaline water were available in Tharparkar underneath the coal reserves. “SECMC has utilized the same water and produced high yield crops during the last three years proving the concept that Thar had enormous potential for biosaline agriculture.
Vice-Chancellor of Sindh Agriculture University Tando Jam, Dr. Fateh Mari, Vice-Chancellor of NED University Karachi, Dr. Sarosh Lodhi, Bhai Khan Shar, Vice-Chancellor of the Shaheed Allah Bux University of Arts, Design and Heritage, Jamshoro, Dr. Bilques Gul, Director, Institute of Halophyte Utilization, University of Karachi, agriculturists, Mahmood Nawaz Shah, Nabi Bux Sathio, Mustafa Ujjan of SIAPEP, Dr. Abdul Razzak of Asuk University, Turkey, Sohail Awan of Human Development Foundation were among the prominent speakers, while Mohsin Babbar of Thar Foundation moderated the conference proceedings of the event.